This week’s Lauberhorn downhill is long, fast and fan-friendly

The Eiger, Mönch and Jungfrau cast broad shadows into the Lauterbrunnen Valley. North of the Kliene Scheidegg, between Wengen and Grindelwald, the Lauberhorn rises, intercepting the sun’s rays focused now on a cold and desolate start area.

More than 3,300 feet below, an arena worthy of gladiators prepares for the arrival of athletes and fans for the 85th time. Most competitors consider crossing the finish line a victory in itself on this, the longest and one of the toughest downhill tracks on the circuit. Winning a place on the podium means overcoming not only challenges of terrain but of mind, too, given that average speeds exceed 100 kilometers per hour. 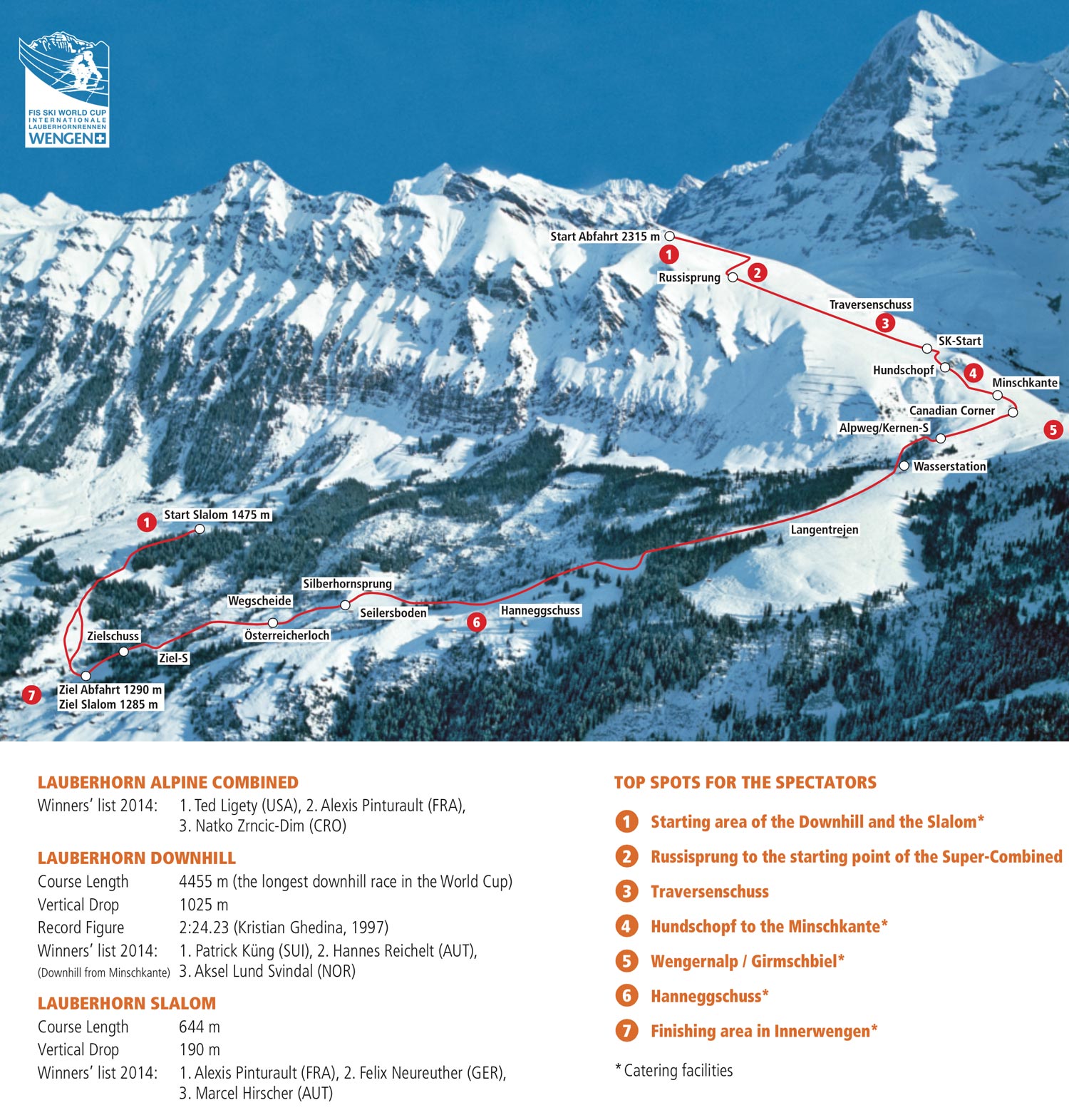 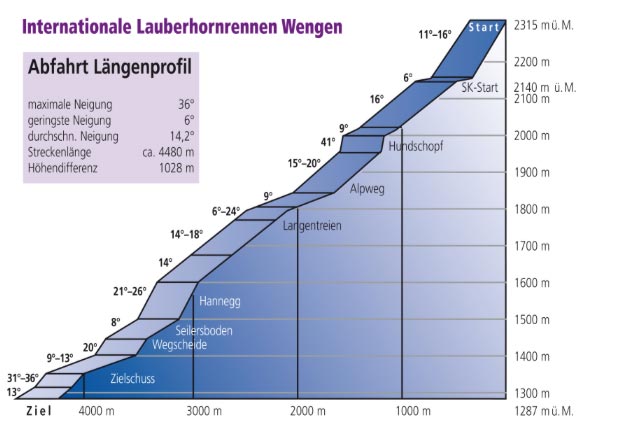 Wengen’s history is among the most storied in ski racing, with at least a dozen named sections traversing the Lauberhorn course; many have earned their monikers from memorable crashes. Since 1930, two nations have earned more than half the wins: Switzerland and Austria, with more than two dozen victories each. Swiss racer Karl Molitor contributed a record six wins during the 1940s.

In the post-war era, Austrians have produced the most multiple winners: Toni Sailer with four consecutive top steps in the 1950s, Karl Schranz with four wins between 1959 and 1969, and Franz Klammer with his wild, on-the-raged-edge triumphs in `75, `76 and `77.

The first non-European win came in the 1980 running from Canadian Ken Read. In 1984, Bill Johnson became the first American to stand atop the podium, but the U.S. would not see another first-place finish again until 1995, when Kyle Rasmussen won. Surprisingly, since 2000 the U.S. is the only country to post a three-peat, thanks to Daron Rahlves’ victory in 2006 followed by back-to-back wins by Bode Miller in `07 and `08.

On race day, the wood-planked Lauberhorn start house is one of the quietest on the circuit, which speaks volumes of the respect for this venue by all who exit its front door. 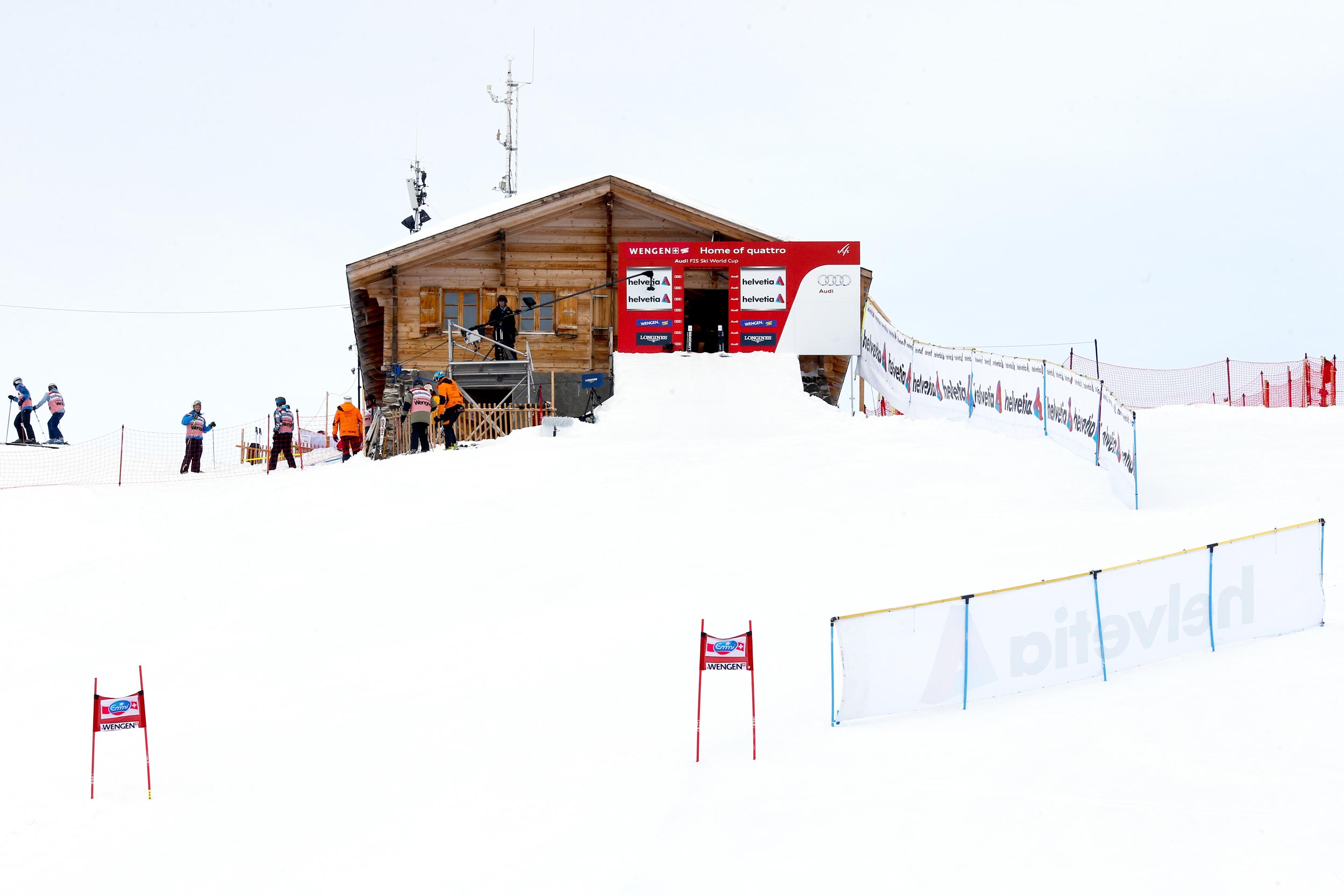 Silence in the start house speaks volumes of respect. GEPA

Tripping the wand, racers have a lengthy gliding section in which to anticipate the nonstop terrain changes coming at ever increasing speeds. The Russisprung (Russi Jump), a built-for-TV jump named after 1972 Olympic downhill medalist Bernhard Russi, is their first indicator that the game is on.

Still well above the tree line, the pace quickens into a sweeping 180-degree left-right footer — the Carousel, which is the critical setup for the Hundschopf (Dog’s Head). This much photographed signature jump launches racers 130 feet off a towering rock face landing onto the Minsch-Kante, the very quick right-foot kicker to left-footer that sent its namesake, Josef Minsch, to the hospital for several weeks in 1965.

A sea of red on the mountainside opposite the Hundschopf pulses with thousands of flag-waving fans. As each competitor’s name is announced when they soar over the blue landing stripes, the appreciative throngs respond in what can only be described as an alpine circus replete with ring announcer, oompah bands, sausage vendors and beer-charged cheers. But no racer hears their name announced, the bass-thumping music or the crowd’s adulation. Total focus is essential to survive the upcoming G-forces in Canadian Corner. Named in 1976 for the “Crazy Canucks” (the term coined by World Cup co-founder Serge Lang), Dave Irwin and Read, who boldly attacked this high-speed fall-away turn, forever garnering their place in Lauberhorn history. 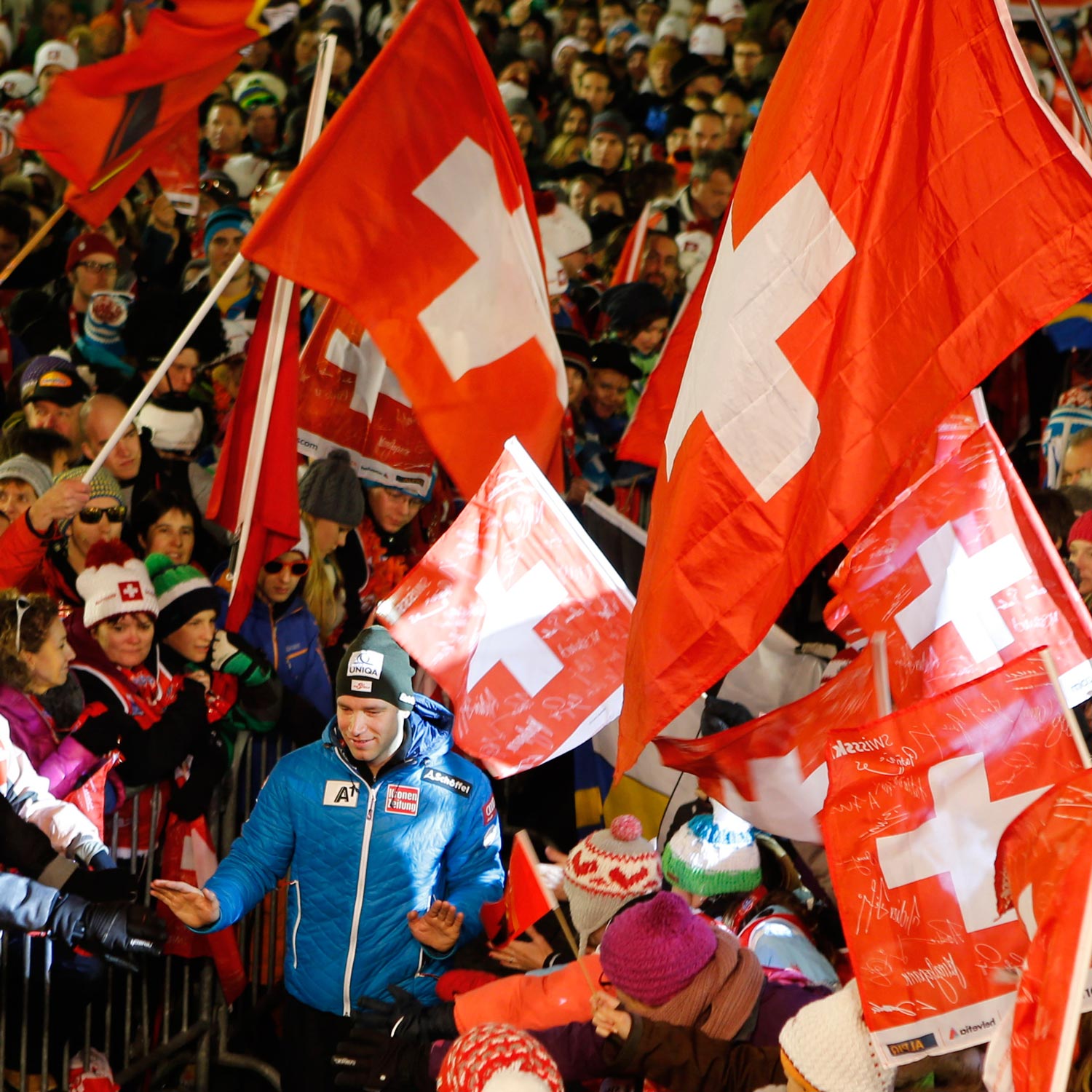 Benjamin Raich parts the sea of flags at the fabled Lauberhorn. GEPA

A short window of sub-60 miles per hour speeds allows a re-set of heart rate, breathing and nerves on the 3-meter wide Alpweg and Kernen-S turns. Named for 2003 winner Bruno Kernen after his crash there in 2006, these very quick 90-degree right-left sequences between a small bridge lead to the most unique visual feature on the World Cup: the Wasserstation Tunnel (Water Station), formed by an iconic railroad overpass and gaining broad notoriety in the 1969 movie Downhill Racer. Carrying speed through the Alpweg and Kernen-S turns through the tunnel is paramount as competitors then face a long gliding section of super G-type turns, the Langentrejen, before dropping into the fastest section of the course. 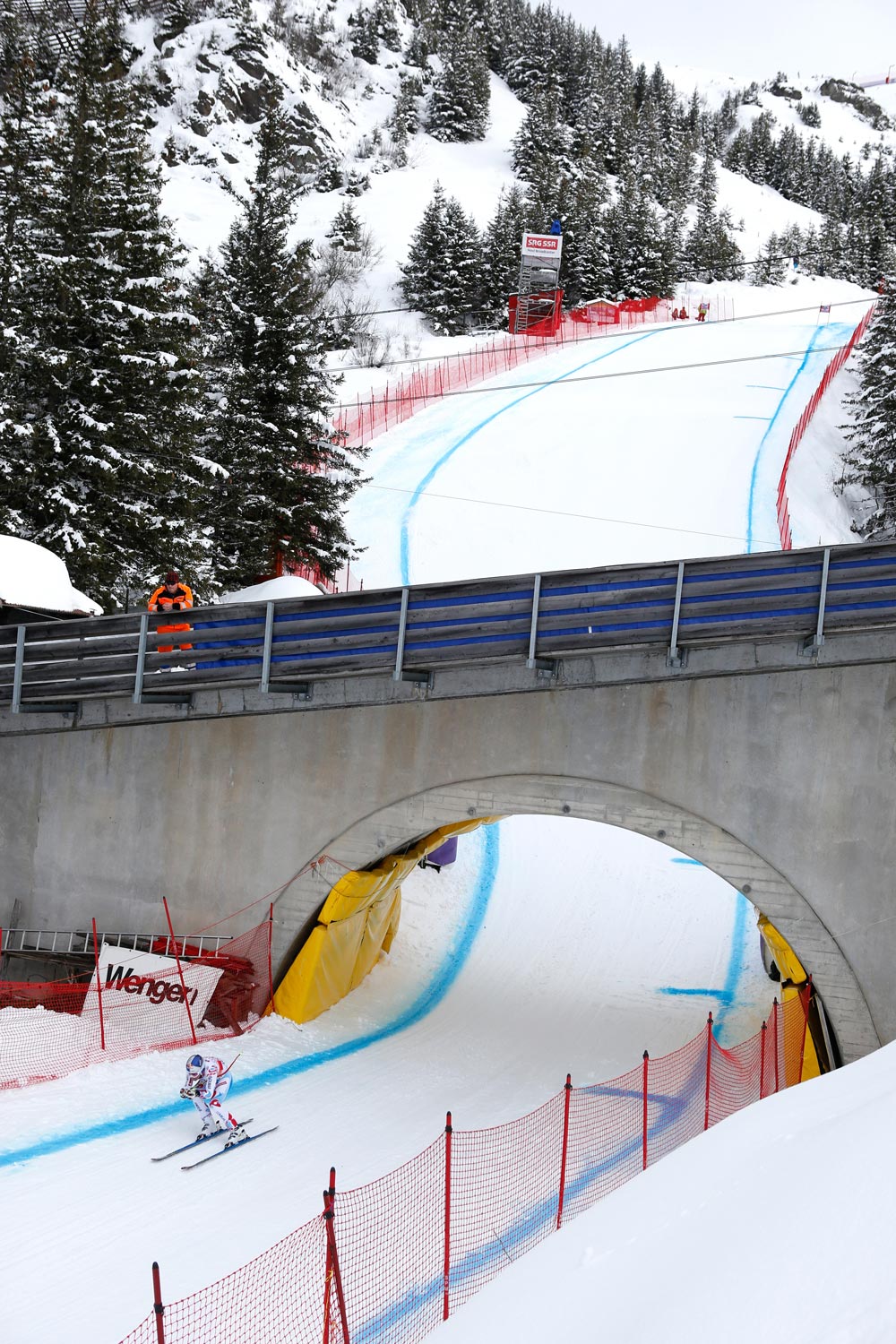 After two grueling minutes and still some 30 seconds from the finish, the Haneggschuss accelerates racers as the terrain drops more than 300 feet. This is the pitch where, in 2013, Johan Clarey reached the fastest speed ever recorded in an FIS World Cup event — 100.61 mph.

At the bottom of the Haneggschuss, with racers carrying their highest speed on the course, a compression bump tests core strength and balance as a prerequisite to entering a grinding left-right footer combination. This sets up the final jump, Silberhornsprung (Silberhorn), quickly followed by the Osterreicherloch (The Austrian Hole) where, during the 1954 event, the unthinkable happened when nearly every Austrian fell. History repeated itself in 1960 as this same section ended the race of formidable Austrian superstar Karl Schranz.

Legs, lungs and nerves now fully spent, only those racers capable of reaching deep into their endurance reservoir are able to hold the line of the final left-footer in the Ziel-S (Finish-S) turn before tucking to break the beam.

In the finish arena, thousands of fans sing praises to their countrymen, most of who struggle to remain standing, heads bowed to the course, body leaning on bent poles, fighting to overcome the physical and mental fatigue, unable to savor the moment. Few, if any, are insolent enough to thrust a fist into the air. 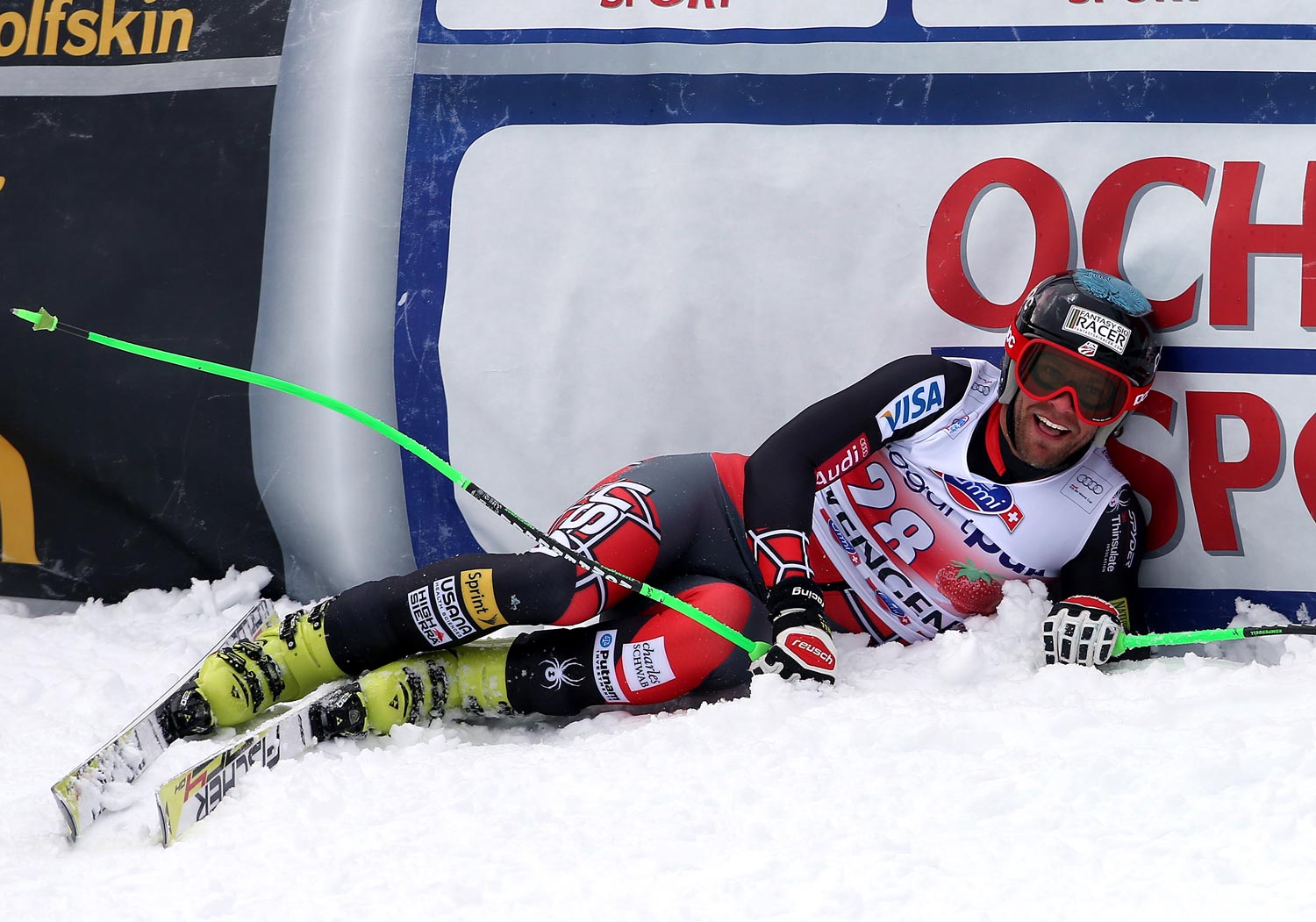 A spent Steven Nyman smiles after finishing at Wengen. GEPA

This year, some racers may visualize breaking the 1997 course record of 2:24.23 set by Italy’s Kristian Ghedina. But then they enter the start house, where the reality of the Lauberhorn quickly and quietly dissolves those numbers.

Can the USST Utilize Collegiate Ski Programs to Achieve Goals?