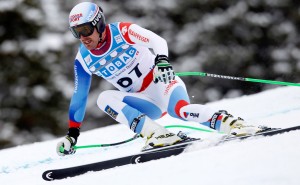 “My time as a ski racer is over,” Daniel Albrecht said Sunday at a news conference in Zurich. In recent years, Albrecht had always insisted that he would keep skiing for as long as he had fun and believed he could return amongst the top skiers, but now the 30 -year-old decided it is the right time to draw the line after an intense career.

Approximately four and a half years after the horrific crash he suffered close to the finish line of the Kitzbuehel Streif, Albrecht realized the road to go back to the top was proving too difficult.

On Jan. 22, 2009 Albrecht’s career suddenly took a completely different direction; in the last training for the Hahnenkamm downhill he fell at the final jump, the fastest part of the slope, sailed about 70 meters through the air and landed on his head and back.

Albrecht spent three weeks in the Innsbruck University Clinic in an artificial coma due to a severe traumatic brain injury. In mid-February he was transferred to the Bern University Hospital where he spent an additional three months. At the end of April, after four months of hope and fear, an all-clear was given to Albrecht, stating neurologically everything was in order.

Albrecht was determined to return skiing at the same level he used to before the crash. In 2007 at the World Championships in Are, he become world champion in super combined and won a silver in the giant slalom. He also celebrated four wins, three in giant slalom and one in super combined.

Although he had only learned to speak properly again just a few months earlier, in Oct. 2009 Albrecht was set to compete at the World Cup opening in Soelden but quickly had to realize that the road back would be lengthy.

The comeback to the World Cup finally happened the winter after that. It was a return that exceeded even Albrecht’s own expectations. In the giant slalom in Beaver Creek in December 2010, Albrecht managed to qualify for the second run, finishing with a sensational 21st place.

“This is worth more than the world title,” Albrecht said after the event. Nobody at that time knew that this first race after the severe injury at the same time would be the best result he would ever achieve again. Albrecht’s only other top-30 results turned out to be a 29th place in Adelboden and a 30th in Kranjska Gora.

For the 2011/12 season Albrecht, switched from Atomic to Head , but even with the new equipment there was no real improvement in his results.

At the beginning of the 2012/13 season, Albrecht attempted to qualify for a spot in Lake Louise. The coaches were skeptical, but gave it their approval since Lake Louise is a relatively easy slope. Albrecht crashed in the second training run, landed in the nets, and suffered a patellar dislocation and torn ligaments – the season was over even before it had begun.

The path of Albrecht is unprecedented in the sport and the way he mastered the whole situation deserves the greatest respect. It is not surprising that “Never give up” became his motto.

VIDEO: Behind the scenes of Eurosport’s VR run with Bode Miller