Ed Chase, a winter sports industry legend and ski technician for Olympic and World Cup champions, died on August 17 in Branford, Conn., with family by his side, after a five-year-long battle with cancer. He was 64 years old.

Born on April 11, 1951, in Sheffield, Mass., Ed was the only son and youngest of three children of Arthur C. and Alice Ann (Anderson) Chase, both longtime faculty members at Berkshire School. Ed grew up in Sheffield, spending part of his early years on skis negotiating a rope-tow-equipped slope built by his father. He attended Berkshire, graduating in 1969, and went on to Middlebury College in Vermont, where he was a member of the Class of 1973. There, he played soccer and was on the first formal men’s rugby team at the college. He was a member of the Middlebury College Snow Bowl Ski Patrol and, like many of the other patrollers, joined the Alpha Sigma Psi fraternity, better known as Slug. 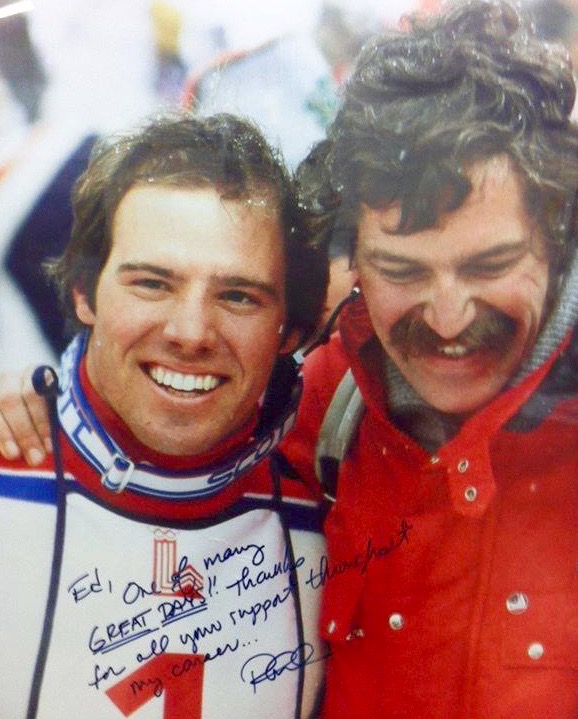 It was at Middlebury that he got the nickname Sleazy Ed, eventually shortened to Sleez. The ski patrol, and the fraternity, already had an Easy Ed, so Sleazy Ed it was.

After college, Ed began a four-decade career in the winter sports industry, with the longest stint at K2. Ed held several different jobs at K2, the most memorable being ski technician for Phil and Steve Mahre, the twin brothers from Yakima, Wash., who became stars on the World Cup circuit – winning 36 races between them: 27 for Phil, nine for Steve – and medal-winners at FIS World Championships and Winter Olympics.

Ed joined K2 and began working with the Mahres after the 1976 Olympics, and was with them for all of their World Cup wins and Olympic and World Championship medals, through their retirement from competition in 1984. “Those were amazing years,” Phil said. “Steve, Ed and I developed a great working relationship, and it really became a great friendship.” Phil said they were lucky to have had the same ski technician for the last eight years of their World Cup careers, appreciating the “camaraderie and the consistency.”

He said, “Sleez worked really hard and put in long hours to master his craft. … He would be out on the hill the day before and the morning of the race, testing the snow, checking the conditions, and he’d give us what we needed. … He was really instrumental in our careers.” Phil said that while their paths had not crossed often in recent years, Ed had remained “a true friend” who would be sorely missed.

Steve Mahre said traveling the circuit together – and “seeing more of the world than I ever thought I’d see growing up in Yakima” – Ed and the brothers developed a great rapport. Ed benefitted, he said, from having to work, most of the time, on just two racers’ skis, when some techs were handling up to eight athletes. “It made his job a little easier,” Steve said, “and we got great product to ski on. There’d be guys doing an entire ski in the time that Sleez spent on one edge; but he could take that extra time. Phil and I also spent time in the waxroom; we’d do our training skis, so that Ed could concentrate on the race skis. He’d often re-do skis completely between runs, so that we had the best possible skis every run.”

He said Ed knew that “every morning when he got up, he had a chance for one of his skiers to be on the podium,” which made it a bit easier to put up with the inevitable stresses of life on the road, and perhaps provided a little extra motivation to make sure everything was just right.

Steve also commented on how lucky he and Phil had been to have a ski technician stick with them for basically their entire careers. “We thought that after Lake Placid (in 1980), Ed was going to call it quits,” Steve said. “But he said, ‘When you retire, I’ll retire.’ I think a couple of years later he was thinking, ‘Hey, when are you guys going to retire?’ But he stuck with us through the 1984 Olympic season. A few years after we all were off the World Cup, I talked with him, and I think he wondered whether he’d made a mistake leaving the circuit. He really loved it, the friendships, the travel, the camaraderie in the waxroom and at the starthouse.”

Ed began his career with a brief stint at Olin Skis before moving on to K2, where he spent nearly 20 years, first in race services with the Mahres and later as promotions coordinator and sales representative. Tom Beach, a K2 colleague, recalls how Ed became a mentor to a generation of K2 folks. “Without ever getting cranky, he showed us tricks with 8-inch files, Scotchbrite, 220-grit carbide paper and wax that most of us couldn’t have imagined, regardless of our own parochial skiing histories,” Beach said. “He suffered our questions, and opinions, with a generosity of spirit that I suspect marked his whole life. I don’t think we realized how much of a mentor he had become until much later in our lives. Now we’re on our own.”

Ed Costie, who worked with Ed on the circuit, spending most of his time on downhill skis and leaving the slalom and GS skis to Chase, said what made Ed successful was his outlook on life. “Everyone loved Sleez,” Costie said, “and he was comfortable with everyone.” At the starthouse, Costie said, “He kept everything under control, kept things light, and projected a lot of positive energy.” Ed had a legendary sense of humor, Costie said, and with his height, his big smile and even bigger moustache, he became one of the most recognizable figures on the World Cup circuit, for athletes, coaches, other techs and the media. And when the race was over and tomorrow’s skis were ready, Costie said, “After a couple of brews, Sleez would sometimes say, ‘You know, this could turn into something.’ ”

Costie also credited Phil and Steve Mahre for the atmosphere that grew up around the K2 World Cup crew. “Phil and Steve made it comfortable for us because they were normal guys who just happened to ski really fast,” Costie said. “They were less about talking to the press, and more about hanging out in the ski room with Sleez and me and the rest of the guys.”

Following his years with K2, Ed would go on to work as a sales rep with Volant Skis, Swix, Maui Jim sunglasses, Tecnica, Blizzard and, over the past few years, Salomon alpine and nordic gear and FlyLow apparel. Ed became one of the most respected and beloved figures in the winter sports industry. Once news of his death got out, Facebook lit up with tributes from those whose lives and careers he had touched over the years.

Ed is survived by his sister Ann Chase Redman of Branford, Conn.; his son, Peter, of Phoenix, Ariz.; Peter’s mother and Ed’s ex-wife, Lisa, of Gunnison, Colo.; a nephew, Arthur Chase Rhodes; and two nieces, Amanda Elizabeth Wheeler and Jennifer Maria DelVaglio. He had previously lost both parents, Arthur and Ann Chase, and his sister Janet.

Plans are in the works for a memorial event for Ed – or more properly in this context, Sleez – at the next Snowsports Industries America trade show in Denver, scheduled for late January 2016.

Tim Etchells has known Ed Chase since before he was Sleez; they worked together on the ski patrol at Middlebury College, where they were roommates for three years.