Outrage in America: The Hirscher straddle seen only on Universal Sports 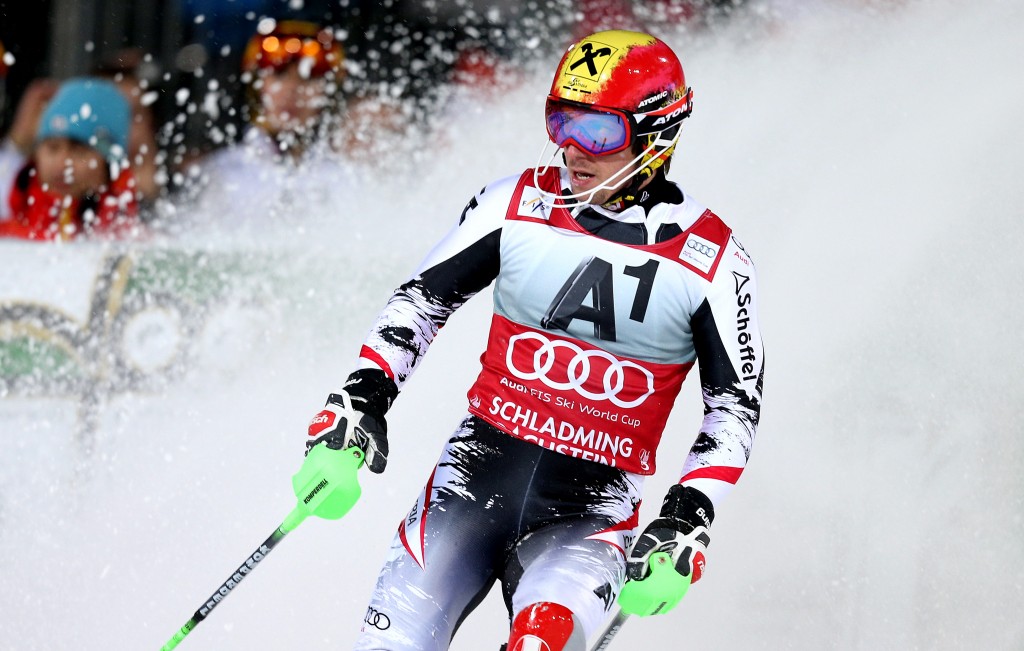 During the live Universal Sports broadcast of the Schladming night slalom on Tuesday, Jan. 28, announcers Doug Lewis and Steve Porino questioned Marcel Hirscher’s passage of the first gate on course in the second run. In slow motion video replays during the broadcast, the analysts pointed out what they believed could have been a straddle of that very first gate.

“First gate, to me that is a straddle,” Lewis asserted on air. “You can see that left ski on the other side of the first gate.”

Porino was quick to consider the direction of the gate’s deflection before offering his take on the matter. “Well see how the gate falls, where it falls, if it gets pushed…,” Porino reasoned before Lewis cut in.

“It’s between his legs it looks like right there to me.”

Hirscher went on to finish the race in second place, and he thus retains a 50-point lead in the slalom standings for the season over Henrik Kristoffersen and Felix Neureuther who finished first and third, respectively. When Porino and Lewis later posted the Universal Sports broadcast video to social media and asked American fans what they thought of the matter, an overwhelming number of individuals — including prominent former national team athletes — labeled Hirscher a cheater and called for him to renounce his result.

But European fans and commentators, who usually view World Cup races in high definition, initially seemed silent on the matter. There was no on-air debate about the passage. Furthermore, in the days immediately following the race there was no discoverable mention by any World Cup athlete, team, race official, or European news agency to question Hirscher’s passage of the first gate in Schladming. Is some grand conspiracy afoot that only American fans have felt compelled to speak up? 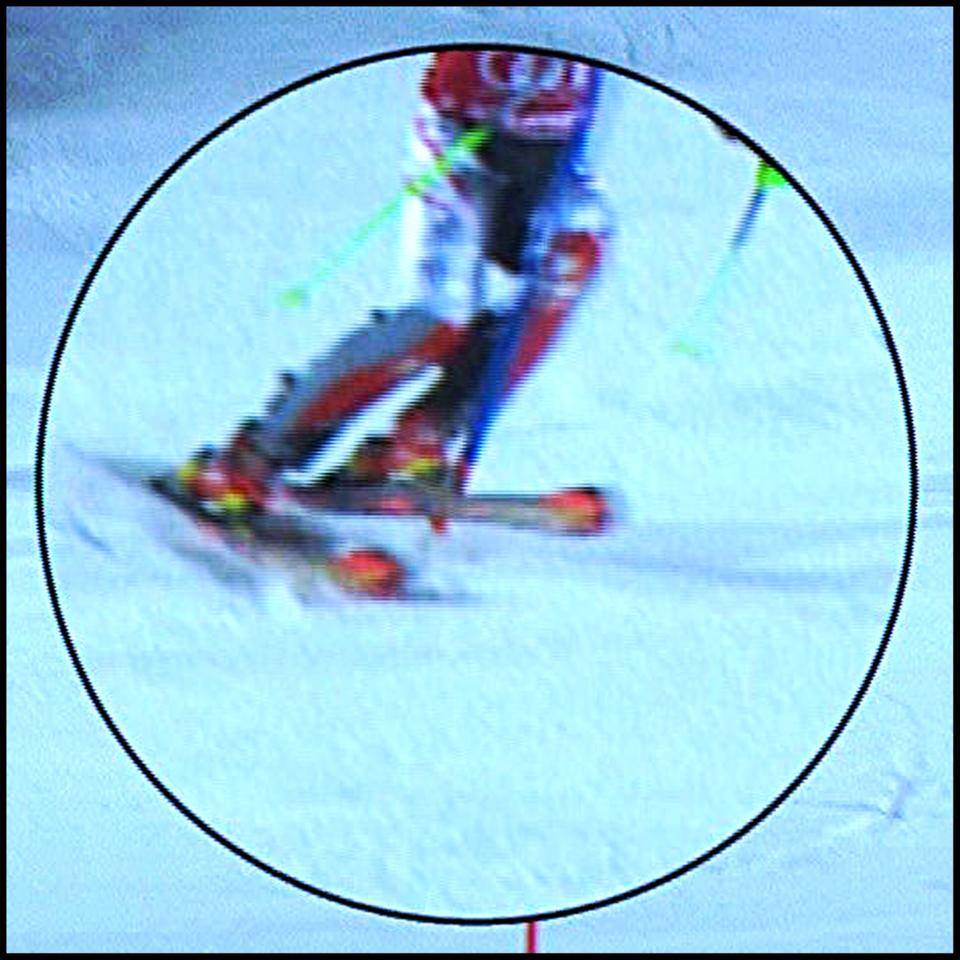 After our initial version of this article ran early Friday (Jan. 31), German Eurosport released a similar piece questioning the passage as well. FIS race director Guenter Hujara responded to the accusations by stating, “The protest time limit is over, the result is therefore final.” However, the Austrian Ski Federation released a photo which the team insists relieves Hirscher of any guilt in the matter. Furthermore, Hirscher posted a similar picture in even finer detail on his Facebook page Saturday (Feb. 1) to silence critics.

Eurosport followed up by admitting Saturday that the frame refresh rate on the television broadcast led to the optical illusion.

Hirscher is no newcomer to accusations of poor sportsmanship when it comes to straddling. A controversy in 2012 — when Hirscher won the famed Zagreb Snow Queen Trophy race only to be called out later by an Austrian newspaper (yes, Austrian!) as well as fellow World Cup athletes like Ivica Kostelic for straddling — placed the athlete under great scrutiny and questioned his integrity. Kostelic’s remarks launched an investigation by the FIS into past race video.

Hujara presented the media with high-resolution video in 2012 from the Adelboden and Zagreb races that appeared to show Hirscher skiing the questionable gates correctly. However, Hujara warned all federations that the FIS considered the matter seriously and would not tolerate cheating.

Race results cannot be revoked post-hoc since rules permit only a 15-minute protest window after the conclusion of the race. However, officials have the right to sanction an athlete who they discover has violated the rules after later review.

“If there was real evidence that I really straddled a gate in Zagreb, then they can take my 100 points and my prize money back,” Hirscher remarked in 2012 during the debacle. “I only want to win in a fair way.”

At the Wengen and Kitzbuehel races that year, Hirscher was disqualified for straddling and fined 999 Swiss Francs for continuing on despite the infractions. However, this practice that plagued Hirscher’s character in 2012 seemed all but silenced until the Universal Sports broadcast of this year’s Schladming night slalom.

Video control is in place at World Cup races to prevent precisely the infraction Hirscher is being accused of by American viewers. Many may recall that Bode Miller was disqualified for straddling a gate near the finish in this year’s Kitzbuehel super combined before the race was even over. Furthermore, with critical points on the line for the slalom globe, any other nation suspecting that Hirscher had straddled would have been quick to throw down the necessary 100 Swiss Francs to file a protest for further review before the results were finalized.

What was suspicious about the Universal Sports video all along was that some freeze frame clips appeared as if they showed Hirscher straddling while the very next frame exonerated him of the offense. Much like the “Young Girl Old Woman” optical illusion which relies on figure-ground perception, a viewer can look at the blurry, pixelated blending of Hirscher’s raised left Atomic ski as it passes the red base of the blue gate and declare, quite convincingly, that the ski is both on the left side and on right side of the first gate. The video, which is grainy, lacks depth perception and includes numerous shadows from gates, snow spray, and the athlete (since the event was contested under flood lights). Race officials and the national teams all had access to video of significantly higher quality.

The German Eurosport video appeared much more damning, but broadcasters have now admitted to the illusion. Photos released by the Austrian Ski Federation, pulled from the same video, along with the photo Hirscher posted to Facebook is convincing of correct passage.

Lewis later took to Facebook to retract his accusation after further review of the video.

“I think the inside (left) ski is up in the air and so you can see the gate base below it as it passes the front of the ski. However, when the boot goes by the gate I don’t think you see the gate in front of the boot. Anyway, it was on TV and 50,000 people saw it. I know that if there was doubt, the US and more importantly the Germans and Norwegians would have protested,” he said. “No straddle. End of discussion.”

Porino used social media to defend the questioning in the live broadcast.

“A replay came our way… it looked at least close, but in the end we said inconclusive,” Porino noted before telling Facebook commenters that he now agrees with remarks that it was not a straddle despite the initial video clip raising suspicions.

This article was updated on Feb. 1 as new information became available.

Video courtesy of Universal Sports is only available for viewing within the U.S: 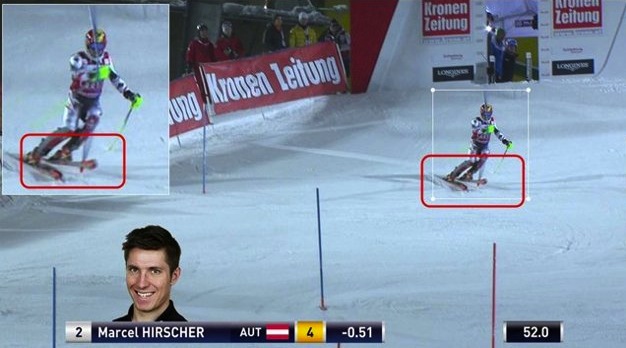 C.J. Feehan
Former editor in chief
- As a USSA Level 300 alpine coach and official, Christine J. Feehan spent more than a decade training elite athletes at some of America's preeminent ski academies – Burke, Sugar Bowl, and Killington – prior to joining the staff at Ski Racing in 2011. She is a graduate of Dartmouth College and Skidmore College and currently resides in Vermont.
Kranjska Gora giant slalom is canceled
By Geoff Mintz
Conditions were simply not favorable for ski racing. There was fog, snow, rain and even a bit of wind.
Five (more) lessons to learn from Shiffrin
By Jim Taylor
She is not only a remarkable athlete, but, perhaps more importantly, a genuinely nice and humble person.

11 hours ago / SR Staff
The Italian had been training in Kirchberg, Austria in preparation for Friday's super-G in neighboring Kitzbuehel.