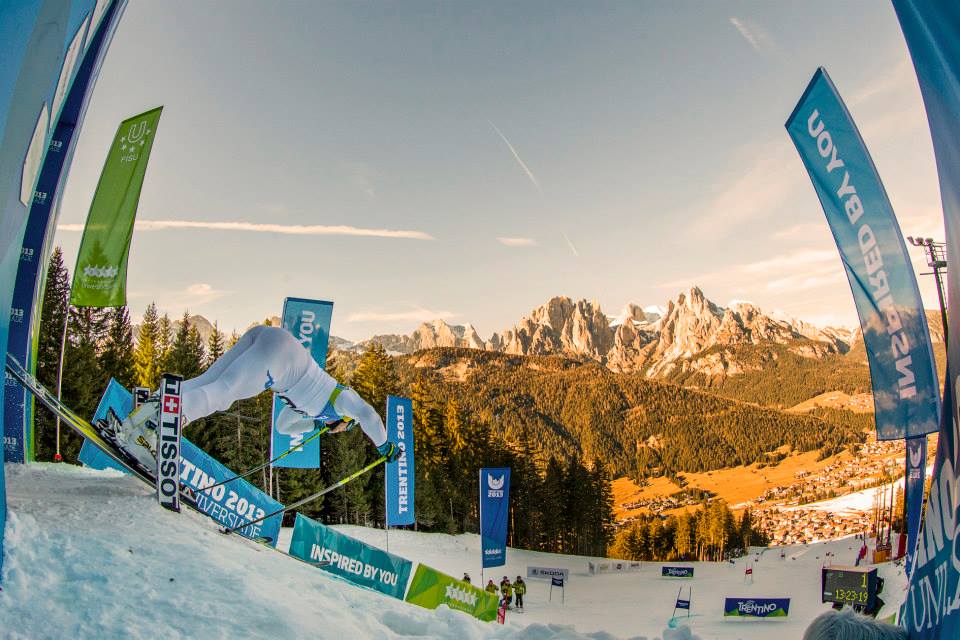 The World University Games rolled on in Trentino, Itlay with the women’s super G at Passo San Pellegrino on Sunday and the men’s giant slalom at Pozza di Fassa Tuesday, where Middlebury College’s Hig Roberts cracked the top 10 for a seventh-place result, the best finish among any NCAA skier in the race.

Roberts sat in second after the first run behind eventual race winner Jonas Fabre of France.

“First run, I came down 38th and the snow was a little rough,” noted Roberts. “When I came through the finish and saw where I was sitting on the TV screen, I was surprised. I felt solid and on top of it, but was not expecting to put it together that well.”

Roberts skipped the first NorAm series of the winter to focus on training, and as a result he had little sense of how he would stack up against the other competitors.

“Second run was interesting. I went out of the gate very confident but also a tad nervous. Coming onto the pitch I got caught in some chatters and went down on my hip. I thought it was over, but I got up and kept going,” added Roberts.  “I knew I had to just send it from there considering the field that was right behind me after first run… a few World Cuppers and national team members from all over. When I came across the finish, I was very excited to see I was still in there.”

Thibaut Favrot of France and Italian Giulio Bosca rounded out the podium in second and third. New Mexico’s Joonas Rasanen, skiing for Finland, followed for NCAA skiers in 18th, while DU’s Grant Jampolsky and Colorado’s Kasper Hietenan put in strong performances in 29th and 30th, respectively.

“It has been an awesome experience to represent the U.S. and Middlebury,” said Roberts. “College skiing is quite a reward and being able to compete as one who is, in fact, still finishing up work from the semester is very awesome.”

In the women’s super G on Sunday, Shane McLean of the University of Colorado put together a solid speed run to finish 15th as the top American and NCAA athlete while Utah freshman Lauren Samuels followed closely in 17th. The women will contest the giant slalom discipline tomorrow.

C.J. Feehan
Former editor in chief
- As a USSA Level 300 alpine coach and official, Christine J. Feehan spent more than a decade training elite athletes at some of America's preeminent ski academies – Burke, Sugar Bowl, and Killington – prior to joining the staff at Ski Racing in 2011. She is a graduate of Dartmouth College and Skidmore College and currently resides in Vermont.
Hoefl-Riesch leads downhill training in Val d'Isere
By SR Staff
After yesterday's disappointing straddle in the Courchevel slalom, Maria Hoefl-Riesch rebounds with a fast training run in Val d'Isere.
Worley tears ACL in Courchevel crash, out for season
By C.J. Feehan
French World Champion Tessa Worley ruled out for rest of season, Tanja Poutiainen and Susanne Riesch also evaluated.