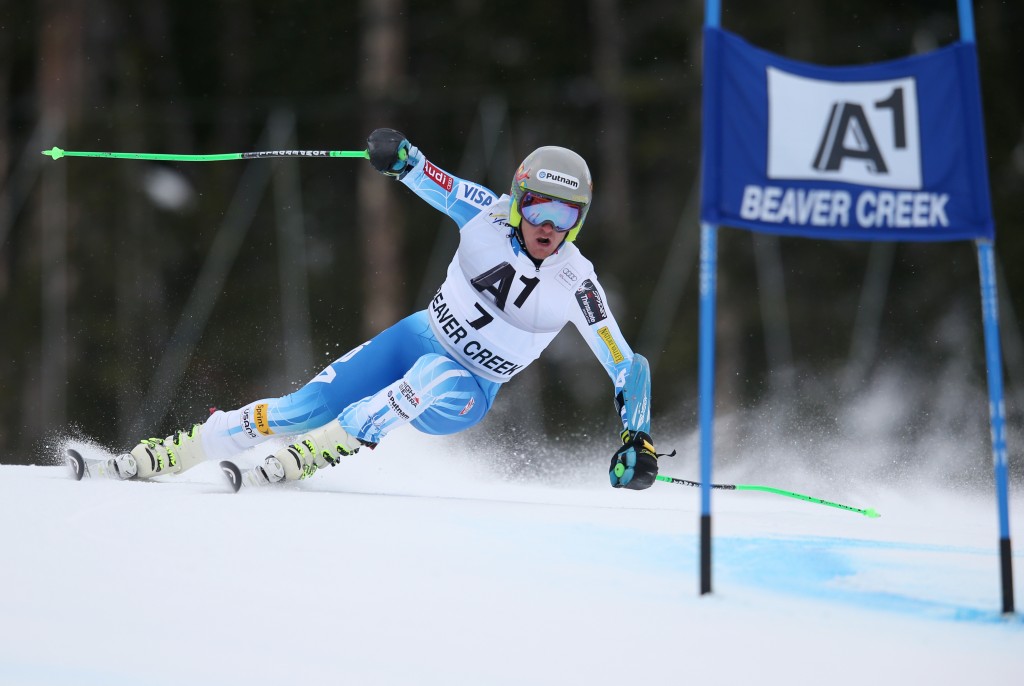 Ted Ligety on the Birds of Prey GS track. GEPA

BEAVER CREEK, Colo. – After a first run deficit that left Ted Ligety sitting in fourth, the Beaver Creek crowd wondered if his early season woes would continue stateside. But the minute he pushed out of the start on run two, those questions were quickly erased.

Ligety attacked from the beginning with aggressive, clean turns that were less frequent in run one, and he built upon his advantage at each interval. A small mistake coming over Golden Eagle was the only blemish in an otherwise perfect run, and he came through the finish to the roars of the crowd with a 0.94 second advantage. But the race was far from over with Marcel Hirscher, Alexis Pinturault, and surprising first run leader, Benjamin Raich, still to come.

Hirscher, who had the smallest of advantages in the start (only one-hundredth of a second over Ligety), never looked comfortable on course and lost time on every turn, coming down with a six-tenths deficit. Next up was Pinturault, who surprised even himself with a third-place finish in yesterday’s super G. He skied strongly, but he needed to ski flawlessly in order to stay ahead of Ligety. His lead of 0.24 slowly evaporated and he crossed the finish line 0.18 out.

Two down, one to go.

The final racer to stand between Ligety and his 23rd victory in GS was Raich, the winner of 36 World Cup races and also the oldest contender in the race. But it was not to be for Raich, as he ran into trouble before the first interval and immediately lost his small advantage of 0.25 from run one. The mistakes kept piling up all the way down the course for Raich, leaving a podium finish out of reach. Raich ultimately crossed the finish in fourth place for the second straight GS race. The win belonged to Ligety.

“Hirscher and Pinturault – those guys are amazing skiers, for sure. Those guys are the guys I love to watch skiing, and to be able to get in front of them is always nice,” said Ligety. “It’s hard to pick favorites, for sure, but to be able to win on home soil is always awesome, and to get the first win of the year so far is definitely a nice way to get the rest of the season going. After the first race, not doing as well as I wanted to, I was a little bit frustrated. That’s how it goes sometimes in ski racing.”

The win marked Ligety’s fourth straight and fifth overall on the Beaver Creek track. It is his 23rd victory in GS, tying Swiss great Michael Von Gruenigen for second all-time, trailing only Swedish star Ingemar Stenmark with his 46 wins.

“Stenmark is so far away. He’s such a legend in the sport. I think what he’s done is pretty unattainable. To be able to pass or equal Von Gruenigen at this point is awesome. He was one of my childhood heroes,” acknowledged Ligety. “I loved watching him compete in the World Cups in Park City when I was a kid, so to be able to have the same amount of World Cup wins as him is pretty surreal. I never would have guessed that I’d be anywhere close to him as a kid. To be up there with one of the legends of our sport is really cool.”

After the opening GS in Soelden, it looked as if Hirscher’s new strength and set-up would finally give him the edge over Ligety in the event. But today, Ligety showed that he his still the man to beat in GS, with an impressive second run in challenging conditions.

“It was definitely not easy today … it is super cool that I am on the podium especially after both runs were pretty fast,” said Hirscher of the course sets. “So I am super happy to be on the podium again … As we saw today, Ted was definitely one of the best, no, I’m sure the best GS skier in the world.”

Pinturault continued his consistent season with his third podium of the year and second in GS after finishing third in Soelden. He was the only one to remain close to Ligety on run two, but could not match the clean skiing clinic that Ligety put on.

“I tried to stay focused only on my skis and to ski as fast as possible. I’m fine in second which is a really good place for me today,” said Pinturault of the result. “For me it’s not surprising to see the top five today. I think it’s going to be a big fight between the four of us.”

The Americans had a strong showing to back up Ligety’s win. Tim Jitloff skied two skillful runs to finish ninth, besting his previous best result in Beaver Creek of 10th. He had impressive top sections both runs, but ran into trouble on the bottom half of the course. Regardless, he was pleased with his top-10 result and feels confident heading into Are, Sweden, next weekend.

“That last bump got me. … I think without that one I could have pulled ahead and be sitting in first right now (with nine skiers remaining). But after Soelden and crashing out in the second run, I’m happy that I came down and I put together a pretty solid second run,” said Jitloff. “We have to build momentum going to Are, and then we’re going to try to kick it up a notch and get a better placing. … I did not want to come into the second run with the approach of I have to do something special to get up in the top 10. I just want to ski consistently and the way I have been, and it should be enough.”

Dark skies from the morning cleared to help eight racers outside of the top 30 qualify for a second run, but none had a bigger move than American David Chodounsky. The former slalom specialist squeezed into the top 30 — starting bib 66 — from 29th after run one, and he took advantage of a much earlier start in the second run to finish 17th for his first-ever GS World Cup points.

“It’s unbelievable! I didn’t know what to expect. I knew I was skiing well, coming off a second place at the NorAm last week. But I just came in here wanting to have fun, whatever happened happened,” said an excited Chodounsky in the finish. “I knew I had a shot here to make it in the 30, but I wasn’t expecting it I guess. I just was going to have fun, and it worked out. Second run, that was such a smooth course, it was so much fun. I took advantage, I had a good run, and I’m really happy.”

The remaining Americans did not fare as well. Brennan Rubie was skiing a fast run, but fell on his hip with the finish line in sight, causing him to miss qualifying for a second run. Mark Engel ran into trouble over the final jump and did not finish and Jared Goldberg did not qualify for a second run.

The only Canadian to qualify for a second run was Dustin Cook, who finished 30th on run one and moved up to 21st for a career-best GS result.

The men’s tour moves to Are, Sweden, next weekend to replace the Val D’Isere races. They will race a night GS on Friday, after the women, and a day slalom on Sunday.

Jessica Kelley
Contributor
- A 10-year veteran of the U.S. Ski Team, Kelley collected three NorAm titles, won GS silver at the 2002 World Junior Championships, and was a member of the 2007 World Championships team during her professional career. She resides in Park City, Utah, with her husband, Adam Cole.
Vonn adds another podium in Lake Louise, Gut wins
By Geoff Mintz
Julia Mancuso is the next best American in sixth, and Maze finishes third.
It's still Lake Lindsey
By Geoff Mintz
Saturday marks an historic day for the U.S. Ski Team with it's first-ever Alpine World Cup podium sweep.