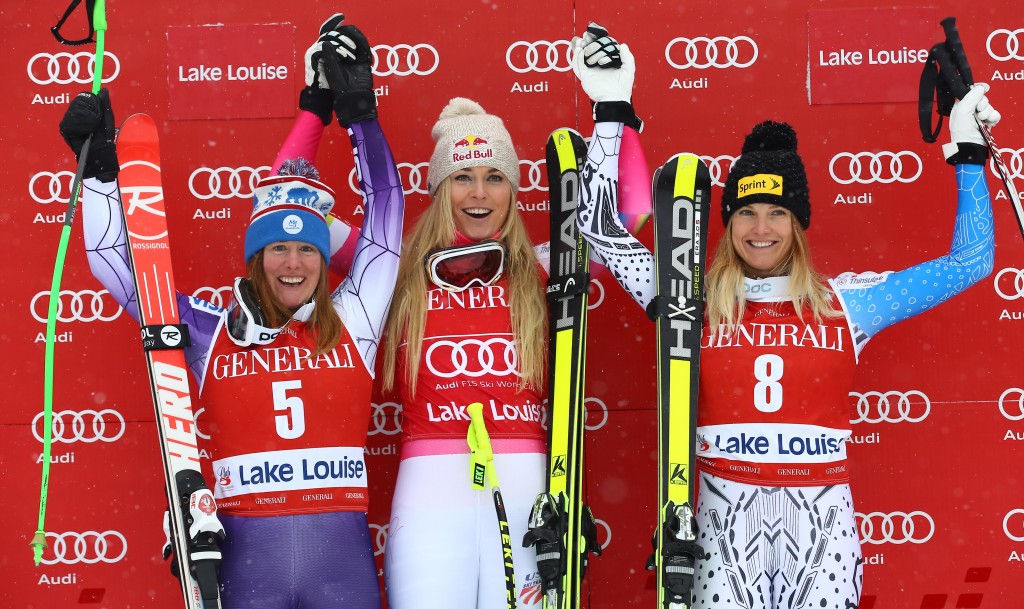 LAKE LOUISE, Canada – An historic day for the U.S. Ski Team was made all the more dramatic Saturday as Lindsey Vonn solidified her comeback from two knee surgeries and reminded the world of just how good she can be.

The Americans kicked out relatively early on the start list — fifth, eighth and 12th. Their times had to hold up through the meat of the international running order, including challenges by yesterday’s winner Tina Maze and reigning overall champ Anna Fenninger.

When Friday’s third-place finisher Tina Weirather, running 22nd, crossed the finish line out of podium contention, the anxiety began to morph into jubilation for the U.S. squad. But the race didn’t end there. The monitor in the finish soon pictured a hard-charging Larisa Yurkiw, racing in her home country and threatening the times of the perfect podium. Yurkiw managed to grab the green light out of the start and remained competitive throughout her run, bringing the modest Lake Louise crowd to its loudest roar of the week. But to the delight of the Americans, Yurkiw slipped back just enough in the lower half of the course to finish fourth, all but solidifying the trifecta for the Red, White and Blue.

The victory in Lake Louise, the 15th of Vonn’s career, clearly signals that the four-time overall champion and Olympic gold medalist is back in business after a nearly two-year recovery process.

“It’s just about finding my rhythm and finding my confidence,” said Vonn after the win. “Every day has gotten better here, and today I just went a little bit more aggressive than I did yesterday and took some more chances. I’m finally feeling confident going fast again. I haven’t had much training, so the three days of training here have been training for me. But I’m finally back to where I feel confident and I’m pushing the limits and I want more speed. I haven’t had that yet until today.”

Vonn, who’s more confident on the moderate Lake Louise track than perhaps anywhere else in the world, took an uncharacteristically long inspection the morning before the race.

“There’s been some changing terrain here over the last couple days, and every day is a little bit different, so I tried to pay a little more attention to that because obviously you couldn’t see it today,” said Vonn. “The light was really bad. I know this course really well, it’s just a matter of looking at the snow conditions and the terrain.”

Vonn said she honestly didn’t know if a win was in the cards this weekend. Prior to the race, she stated the goal was to walk away with a top five. After catching an edge and ditching some speed prior to the flats, her result a day earlier was eighth.

“I just analyzed video and I looked at and saw that I was just a little bit high in my tuck and I wasn’t pushing myself as hard as I know that I can. I think that just comes from not having trained that much. So I made the adjustments today. I tried to stay deeper in my tuck. I tried to be more aggressive in some turns, and I think it paid off. The whole course I was just much faster all the way down.”

With the win, the conversation regarding the all-time women’s World Cup win record can officially resume. Vonn now needs two to tie and three to overtake the record set by Austrian Annemarie Moser-Proell, who enjoyed 62 career wins. Vonn now has 60.

“It’s always something I think about,” said Vonn of the impending record. “It’s mostly something that helps motivate me in the summer when I’m working hard in the gym. Now, I’m just focused on trying to ski well tomorrow and trying to keep improving. Like I said, I haven’t had much training so I’m not expecting this kind of result all the time just yet. But it definitely gives me a lot of confidence going forward for the season.”

Vonn, Cook and Mancuso have something else in common in addition to all landing on the World Cup podium Saturday. They were all born in 1984. They’ve known each other a long time, came up through the system together and now share the spotlight in Lake Louise together.

For Stacey Cook, it’s her third career podium. The previous two, a pair of seconds, also came in Lake Louise in 2012. She hopes to carry this momentum deeper into the season and continue to find success on the World Cup level.

“I always kind of thought (a podium sweep) was something that was possible with our team,” said Cook. “I really wanted to be a part of it when it happened, so it was a good day to step up. I’m so excited for Lindsey too. It’s just a cool day.”

The U.S. ladies speed team experienced a bit of an overhaul this past summer. A year ago at this venue, results were uncharacteristically off the mark for the Americans. After the Olympic cycle, Swiss coach Stefan Abplanalp assumed head coaching duties, modifying the prep period schedule, emphasizing more GS and unifying the group a bit more than in recent years. With Laurenne Ross also finishing sixth on Saturday — and fourth a day earlier — it’s safe to say something is working for the group.

“The new team dynamic has really forced us to take a step back and not make training so serious,” said Mancuso. “It’s serious because we need to be working on something, but it’s not as serious as a race. And save all that energy, save all the good things you learn from training until race day.

“For me, I didn’t even watch anyone else’s video because I watched mine and I realized I have another gear I need to reach — that other gear to meet my potential and do the best I can in this race,” added Mancuso. “Of course, it takes a little bit of luck. I think a lot of other girls maybe had their best run yesterday, so it was hard to top that … But for us, we were still hungry and we still wanted more. I think that’s another reason why it’s easier to move up. I think it’s harder to perform on the same downhill two days in a row.”

Meanwhile, just off the podium and rounding out the North American top four, the result is the best of Yurkiw’s career. It’s been a long, hard slog for Yurkiw after the women’s speed program was cut by the Canadian federation. Certainly it was a gratifying result for the 26-year-old.

“I’m a racer. I’m always hoping to be the fastest,” said Yurkiw. “I’m coming from a bit of a challenging summer, but who here doesn’t have a challenge ahead of them? It’s always going to be bittersweet for someone to finish fourth in any sport, but I can’t be disappointed. It’s a big surprise for me.”

The women’s race week in Canada concludes tomorrow after they contest a super G at Lake Louise.

See more photos from today’s race in our gallery HERE.

Geoff Mintz
- Geoff Mintz is a former alpine ski racer who cut his teeth at Ragged Mountain and Waterville Valley, N.H. After graduating from Holderness and UVM, he relocated to Colorado, where he worked as an instructor at Beaver Creek prior to pursuing a career in journalism.
Ligety reels in big Beaver Creek GS win
By Jessica Kelley
Fourth Birds of Prey giant slalom victory in a row for the U.S. Ski Team's Ted Ligety.
Reichelt adds another win in Beaver Creek
By Jessica Kelley
Birds of Prey course challenges world's best to combine speed with technical ability.

13 hours ago / Sierra Ryder
The EISA season rolled on with great weather and great racing at Jiminy Peak this weekend for the Williams Carnival, the fifth meet-up of the season.