Fenninger, Hoefl-Riesch and Hosp survive DNFs for medals in SG 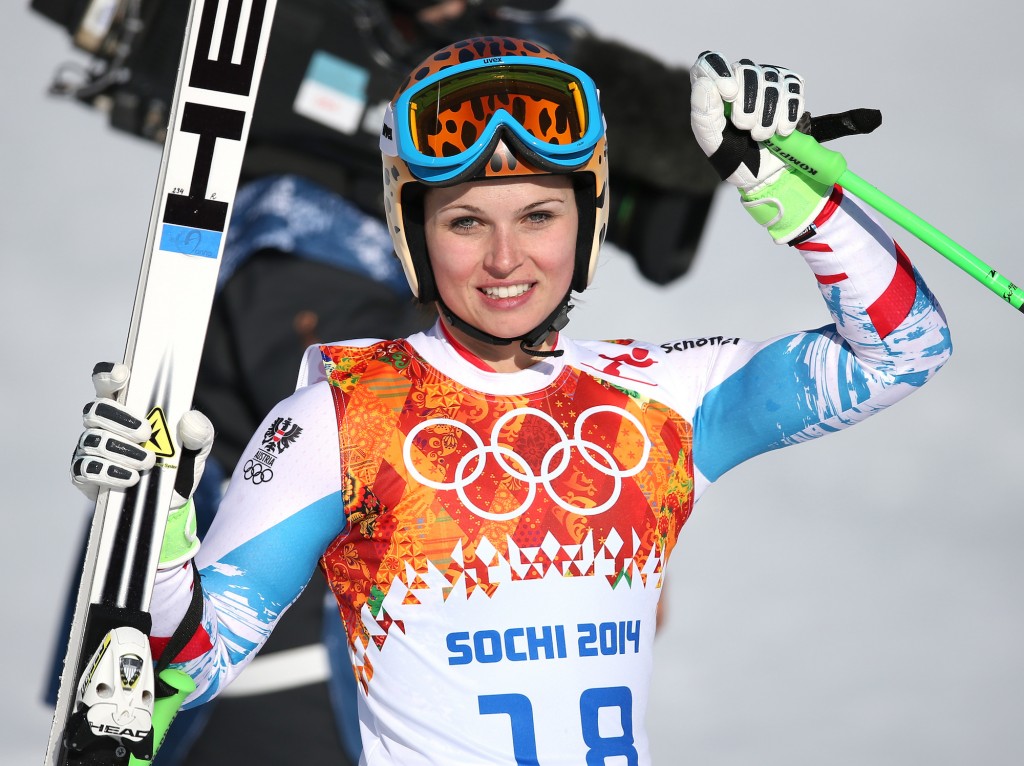 ROSA KHUTOR, Russia — The most significant fact of Saturday’s Olympic women’s super G: The first eight racers out of the start house failed to reach the finish line — except one, Leanne Smith.

For some, the trouble came in the first pitch out of the start, but for most, their day ended just after a jump into the lower pitch, just above the stadium, making for a spectacular show and prompting roars from the crowd for anyone who could make it to the finish line.

Clearly, the inspection process underestimated the turn onto the tough combination of gates on that final part of the run. It didn’t take long for information to get relayed up to the racers at the top, just in time for podium finishers Anna Fenninger, Maria Hoefl-Riesch and Nicole Hosp, who secured gold, silver and bronze, respectively.

“I was the guinea pig coming down here on this bottom part that’s gotten so many people,” said the lone survivor of the first eight, Smith. “I was happy to have the early start number. It’s just the way things work out. It’s a tough section, and you’re the person that’s got to test it out.”

When it was all said and done, Smith, who really had to fight to stay in the course after the jump, finished in 18th place. In total, there were 18 DNFs on the day, mostly concentrated in the first 15 racers.

“I knew there would be good speed coming into that. I just didn’t know it would be that difficult to make it,” added Smith. “I knew exactly where I wanted to go, but with the speed and the heat coming into that breakover, you get pushed really hard. … I just wanted to keep with it and finish.”

The ladies were watching a monitor at the top of the course and receiving information by radio. The Americans, after Smith, moved the line out in response to her run. “We were looking at a ski length off the entrance to that double left-footer off the breakover, and we moved it out,” she said.

Certainly, other teams made the same adjustment.

“The jump coming (into the last pitch) was not that big, but you’re really pressed to have the right direction,” said Canadian speed skier Larissa Yurkiw, who was among those who failed to finish. “It’s not necessarily a quicker move that people have to make, but your timing has to be perfect. … For a lot of the field to do the same mistake is not really acceptable. I’m sure there’s going to be upset athletes and upset staff today.”

Disappointed to finish without a medal, Julia Mancuso was the leading American in eighth.

“I definitely watched too many people make mistakes, and I skied too conservative,” said Mancuso. “And it takes magic on race day, and you can’t really care what anyone else is doing, and that’s kind of what happened to me. Still, I’m happy to make it to the finish, and it’s still a good race for my season, and it makes me happy I had that magic in the super (combined).”

Certainly, there were those unhappy with the course, most notably Lara Gut, favored by many going into the race, who lost time on the lower pitch to finish just off the podium in fourth.

“It was a bit strange and I think the last part was a bit too much,” said Gut. “Everybody was crashing around. It’s difficult to stay on your skis. You are constantly losing them. I don’t know if this is the best way to show off our skiing. It’s not a race; you are just trying to come down. There is no snow at the bottom; it’s not funny anymore. This is a disaster. It was a shame for everybody.”

For the Austrian winner, who picked up her first career Olympic medal, there was less about which to whine.

“For me, it’s a big dream come true. Today, it’s the best day of my life,” said Fenninger. “It was a very tough competition because it was tricky. I had a good run in the first part, but the key to my win was, for sure, the last section to the finish. And I have to thank my coaches because they had good talk on the radio and did a great job to give us the right input.”

For the German, Hoefl-Riesch, already with one gold medal at these Games, it was her first career silver medal in a major event. She really crushed the middle, flatter part of the course, but like most others, lost pace with Fenninger on the lower pitch.

“It was the key to ski these turns perfect,” said Hoefl-Riesch, “and I didn’t. I was just happy to stay in the course. It was a big surprise for me that I was still so fast.”

For the Americans, Laurenne Ross also fell victim to the final pitch and failed to, while Stacey Cook suffered a nasty spill in the first part of the course — she was “a little bruised after the crash but OK,” according a team spokesman.

“It was tough out there today, for sure. It was definitely a battle,” said Ross, who ran seventh. “It’s a really difficult hill and a really difficult set. It was a big challenge for everybody, especially running at the beginning of the race. … I came out there and gave it everything I had, and stuff happens when you’re going for it.”

Women’s Olympic super G, Feb 15, 2014. … It is the 15th super G held at an Olympics, the eighth women’s SG. ….It is the fifth of ten alpine events at these Games. … Three Austrian women, two Italian women and two U.S. women (Roffe and Street) have won Olympic SG gold. … The temperature is 42.8 degrees at the start and 45.1 at the finish.

It is the first Olympic medal for Anna Fenninger. … It is her second win of the season having claimed a World Cup GS at Lienz Dec. 28. … She joins Sigrid Wolf (Calgary ’88), Michaela Dorfmeister (Sansicario ’06) and Andrea Fischbacher (Whistler ’10) as Austrian Olympic super G gold medalists.

It is the fourth Olympic medal for Maria Hoefl-Riesch and her first that it not gold. … It is the third different discipline she has medaled in. … Seven of her eight Olympic results are top 10 finishes. … It is her 11th podium finish of the season

It is the third career Olympic medal for Nicole Hosp and her second of these Games. … It Is her fourth podium finish of the season.

Geoff Mintz
- Geoff Mintz is a former alpine ski racer who cut his teeth at Ragged Mountain and Waterville Valley, N.H. After graduating from Holderness and UVM, he relocated to Colorado, where he worked as an instructor at Beaver Creek prior to pursuing a career in journalism.
Russian ski cross athlete seriously injured in Sochi training
By SR Staff
Maria Komissarova suffered a fractured spine with dislocation and underwent urgent surgery following an accident during practice.
Friday's Sochi Roundup: Warm weather still the story at Laura
By SR Staff
Switzerland's Dario Cologna wins his second gold medal of the Games; three U.S. skiers make large hill finals.

7 hours ago / SR Staff
NASTAR stands for the NATional STAndard Race and Pacesetting is the bond that holds NASTAR together. Each NASTAR resort or club must have