How to Improve Your Slalom Skills

Who knows how many slalom turns U.S. Ski Team men’s head coach Sasha Rearick has studied during his career. But by last spring and summer, he had seen enough to begin working on what he calls “slalom re-calibration.” According to Rearick, this is what the U.S. needs to focus on to become more competitive in the discipline of slalom.

“It all starts at the grassroots, the club level,” says Rearick. “We need to concentrate on the fundamentals.”

Rearick sees the fundamentals of alpine ski racing as aspects of slalom that do not change.

Rewind back to the spring and you will find Rearick, his coaches, and members of the Professional Ski Instructors of America (PSIA)’s Alpine Team scouring old slalom footage to watch Olympic champions and categorize those indigenous aspects of slalom that have never changed: Killy, Stenmark, Phil Mahre, Tomba, Stangassinger, Buraas.

Rearick identified one goal that was accomplished by two criteria. The goal was that the center of mass must take the shortest line. This is accomplished by clean skis and pressure in the fall line.

Rearick placed these at the top of a pyramid. The rest of the pyramid includes the fundamentals, which build upon each other. 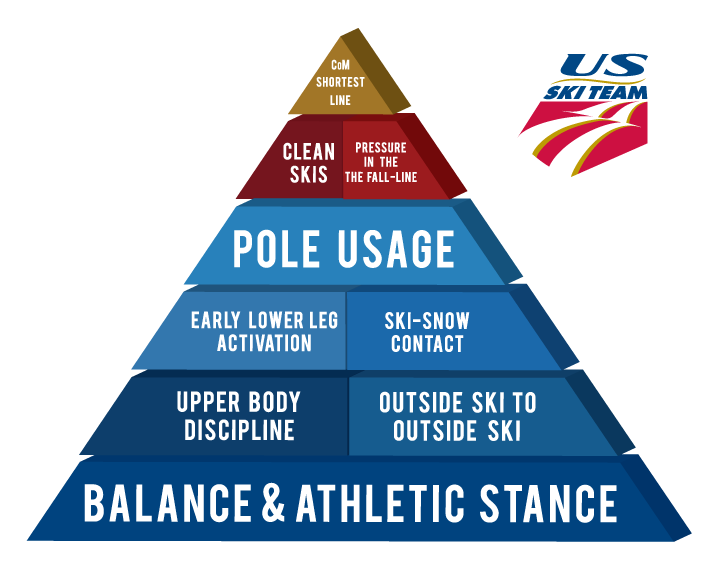 The base or foundation of the pyramid is “balance and athletic stance.” Rearick describes the skier in balance “as being able to do anything at any time.” Balance is in the three cardinal planes of the body (saggital, frontal, and horizontal) and results in the skier’s athletic stance. Fore/aft, lateral, and rotational balance all have a corresponding aspect of stance that makes them successful. To be in balance, the ski racer must control external forces with equal internal forces. For example, edging to hold a turn on the desired line results in body movements or techniques. This can be as obvious as leaning the entire body down to the less noticeable lateral ankle articulations inside the skier’s boot. The skier’s technique is balancing out or equalizing the forces in the turn.

Discipline, which results in stability, is essential for all the fundamentals above it on the pyramid. An upper body that provides an anchor for the lower body to lever, hinge and rotate against will allow the skier athletic freedom. Slalom turns are very quick. With less than a second per turn, the upper body can’t just be a bad-mannered passenger flailing around, but must be an active contributor, ultimately aiding the lower body with equal and opposite movements in each plane. 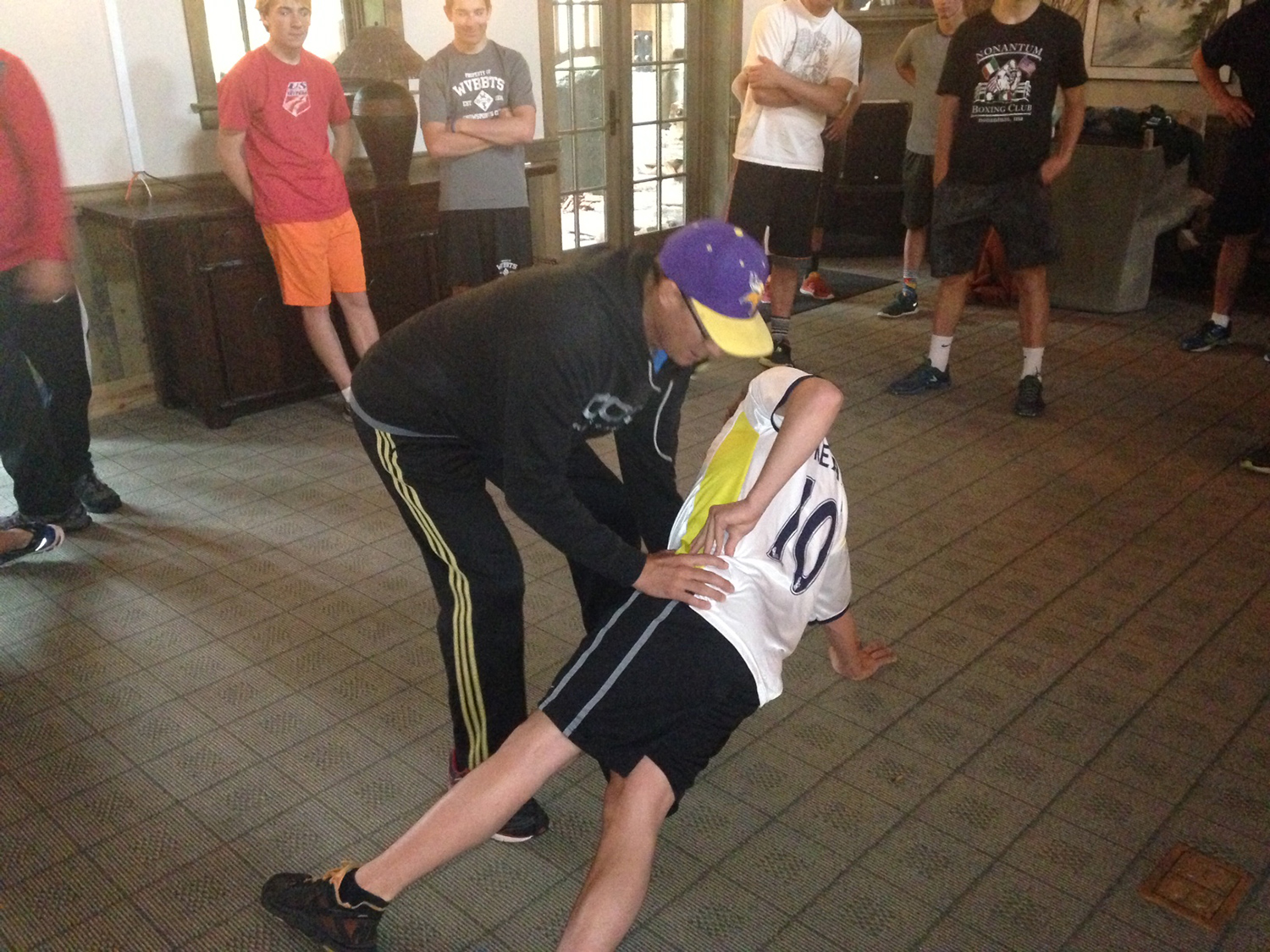 Slalom is an outside-ski dominant event. This is because of the skier’s biomechanics and the physics of the turn. It’s possible to turn and balance other ways, but the lion’s share of the turns need to be made on the outside ski. Moving from outside ski to outside ski is a skill that must be mastered by young competitors. That includes being in balance not just while on the outside ski but also during transition.

This is a complex fundamental, and required plenty of brainstorming between Rearick and his staff last spring. Everyone knew what it was — it was just difficult to put into one name. On first glance this is what the world’s best slalom skiers seem to do with the ski. In spite of the speed, they place it gently on edge while easing it into the turn, creating an intimacy with the snow where others seem to thrash.

The “lower leg” in the fundamental’s name refers to the ankle. It dorsiflexes, and it has a lateral movement quality that the best skiers have found. “Early” refers to the goal of getting early edge and early pressure, which is found by starting the turn with the ankles. And finally, “activation” implies the tension in the ankles — there must be constant tension that pre-innervates the ankle muscles, making them proactive rather than reactive. 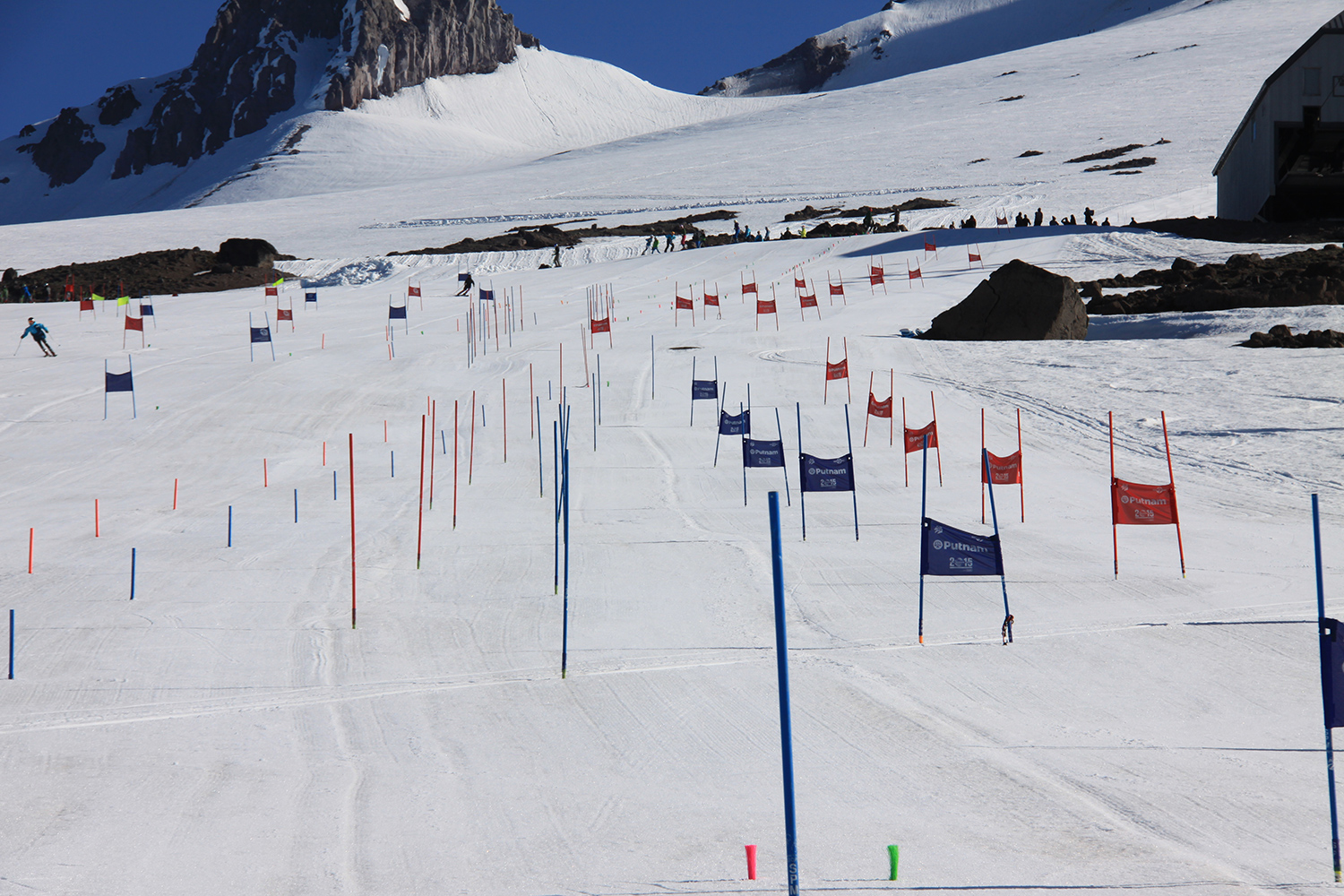 Time for some disco dancing in Mount Hood. Photo courtesy of Lester Keller

The ski racer can orient where the skis are pointed, but the skis won’t turn or change the skier’s path without the snow pushing back. Ski-snow contact is what creates the turn. An entire World Cup slalom turn lasts only 85 hundredths of a second. The more time the ski can be in the snow turning, the tighter the arc is, creating the shortest possible line for the skier’s center of mass.

In general ski technique, we want separation between the upper and lower body. That means creating independence between the legs and pelvis. When these body parts are separate, the body can perform much more skillfully. Slalom is unique in that the arms are actually used as part of the technique. When the arms have no separation from the torso, they end up influencing the torso’s actions. Witness slalom skiers who reach and lean their body toward the gate, an action that moves their torso so far they end up on their inside ski.

Poles do more than just clear gates. While ski racers should not become dependent upon the pole, they need to be proficient in the many varieties of pole plants, touches and swings. Skiing is performed with the skis; poles assist, and allow skiers to push their limits further than if their hands were empty. 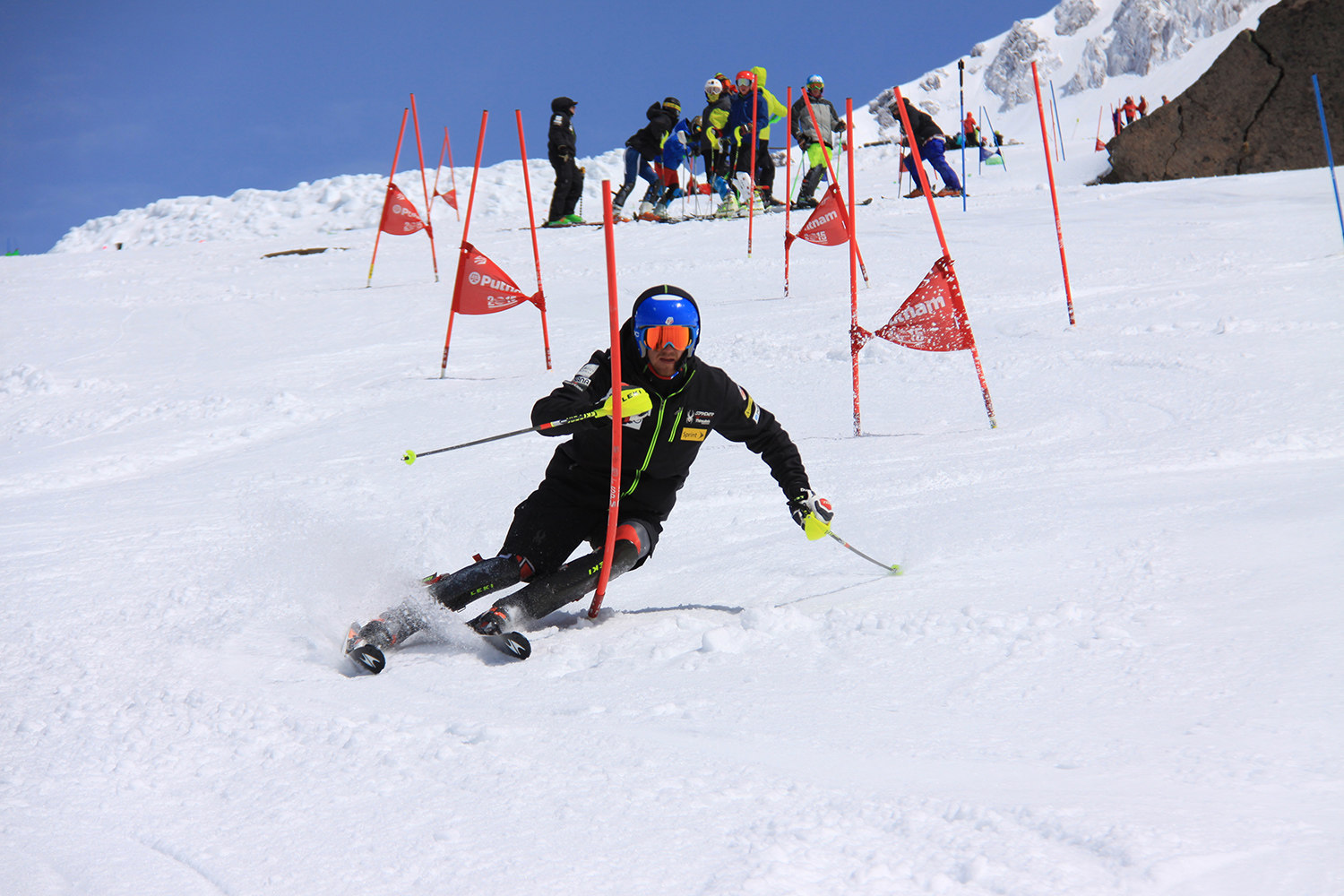 Ski-snow contact is what creates the turn. Photo courtesy of Lester Keller

We can start to see how each lower fundamental of the pyramid is important to the goals above. The ski racer cannot be outside-ski dominant or move from outside ski to outside ski without upper body discipline, all of which requires the ski racer to be in balance. This is why 90 percent of Mikaela Shiffrin’s turns are rather un-dramatic. They contain a flow of efficiency built on fundamentals.

Ron Kipp
USSA Alpine Sport Education Manager
- Currently the Alpine Sport Education Manager for USSA, Kipp completed Ph.D. research in motor control at the University of Utah before starting work with the U.S. Ski Team.
Vail Unveiled
By Geoff Mintz
It’s go time for the 2015 World Alpine Ski Championships in less than four months. How has the Vail Valley been getting ready?
Rocking the ‘Boat
By Geoff Mintz
Steamboat Springs Winter Sports Club is the latest organization to join in on the Rocky Mountain arms race.