Home Opinion Masters: 5 Drills for a Fast Start to the Season

December is drill month for ski racers, a time to integrate on-snow exercises into your free-skiing. Drills center you on your skis, cure bad habits and help you find your edges. There are dozens of them to choose from, more than even the most seasoned coaches can remember. While all are helpful, if you had to pick only a few to practice, here are five standards for older athletes that won’t pound or torque you, but will help you ski faster as you head toward the heart of the ski racing season. (And it’s OK to practice these in January and beyond, too!)

Stand on a slope with some pitch, skis hip-width apart and perpendicular to the fall line. Flatten your skis, sideslipping a few feet, then set your edges while faking a pole plant. Stand taller again and repeat, several times. When you look back at your path down the slope, it should go straight from your starting point to your ending point. If you drift forward as you sideslip, your weight is too far forward. If you drift backward, your weight is too far back. If you sideslip directly down the fall line, you’re balanced over the center of your skis. 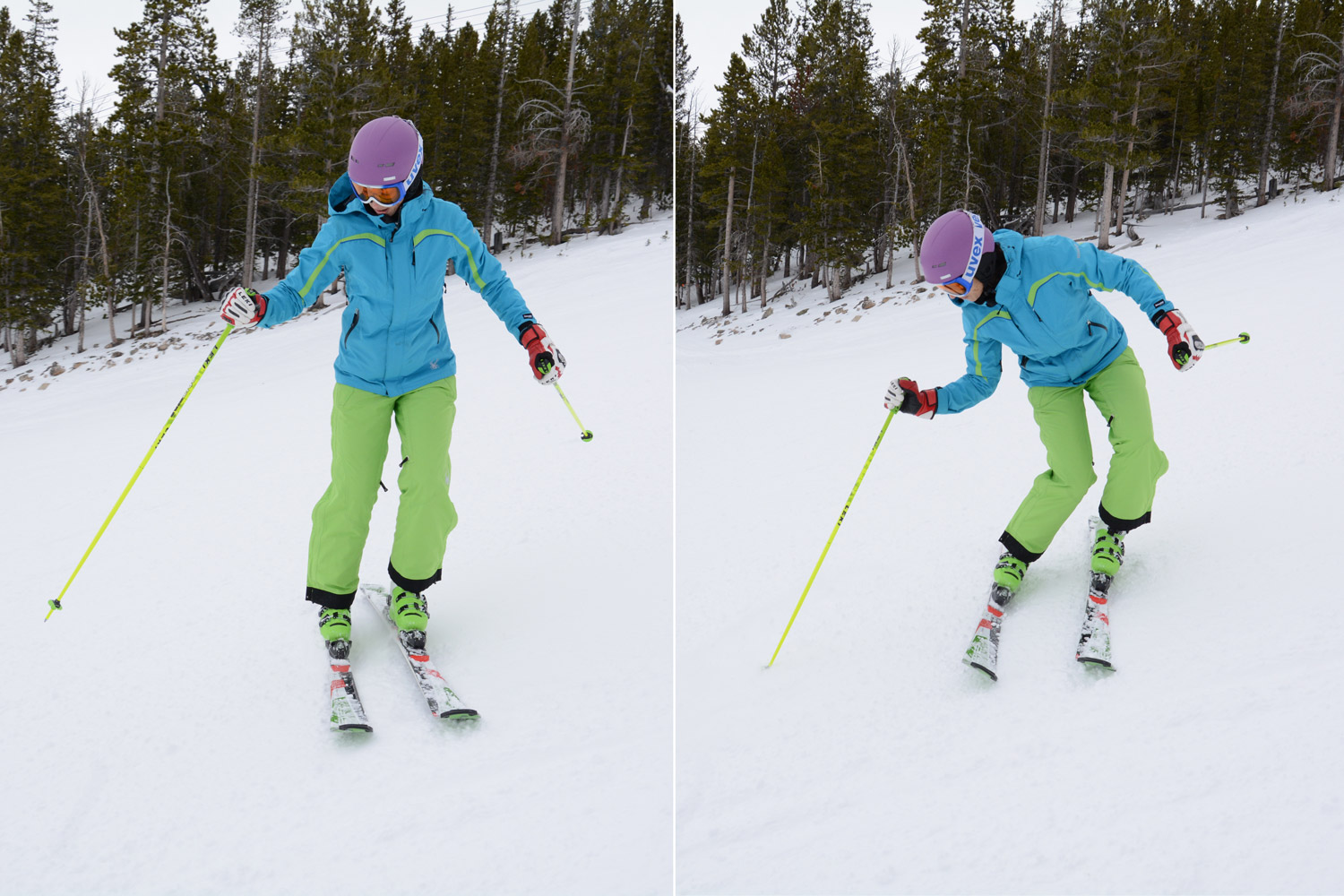 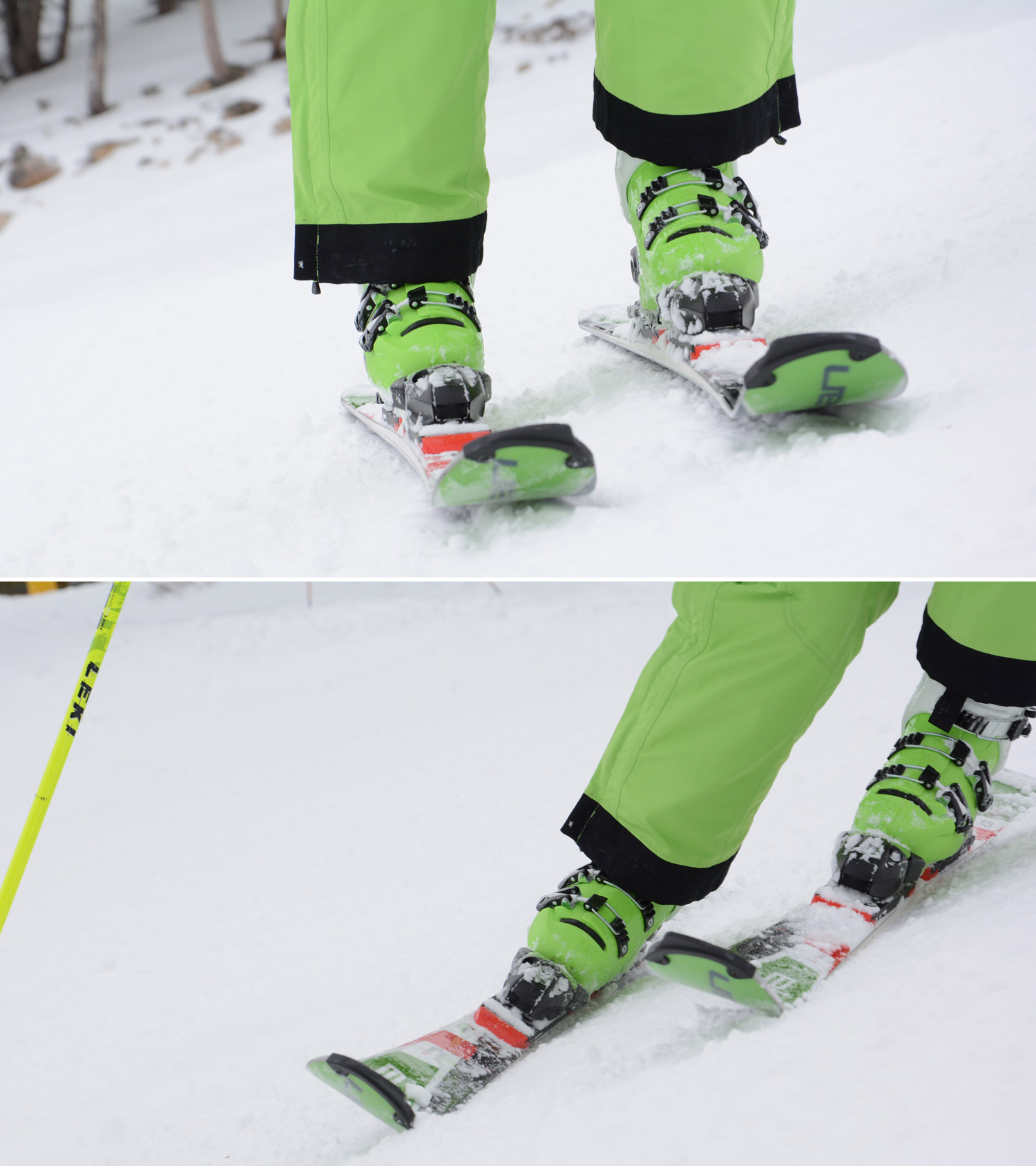 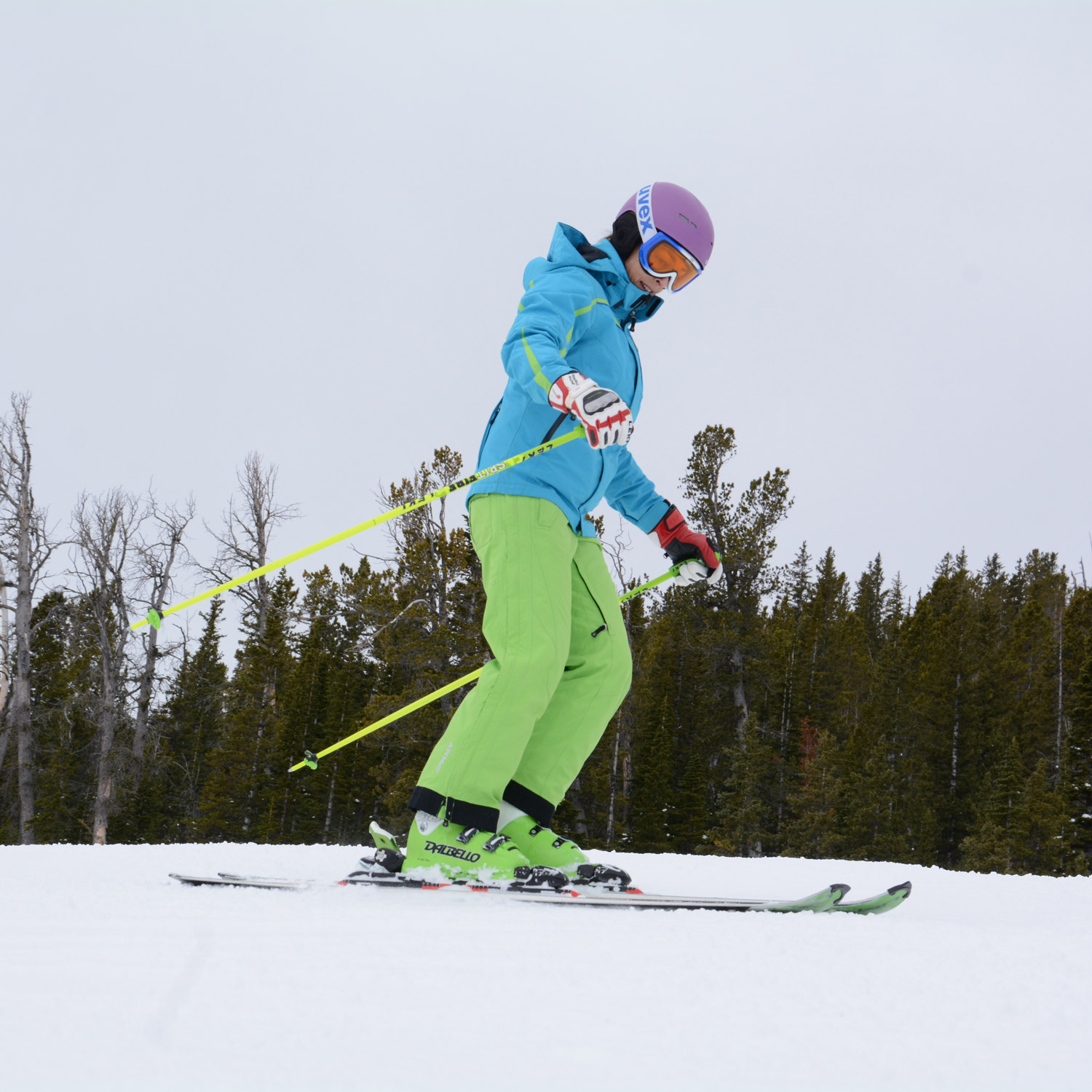 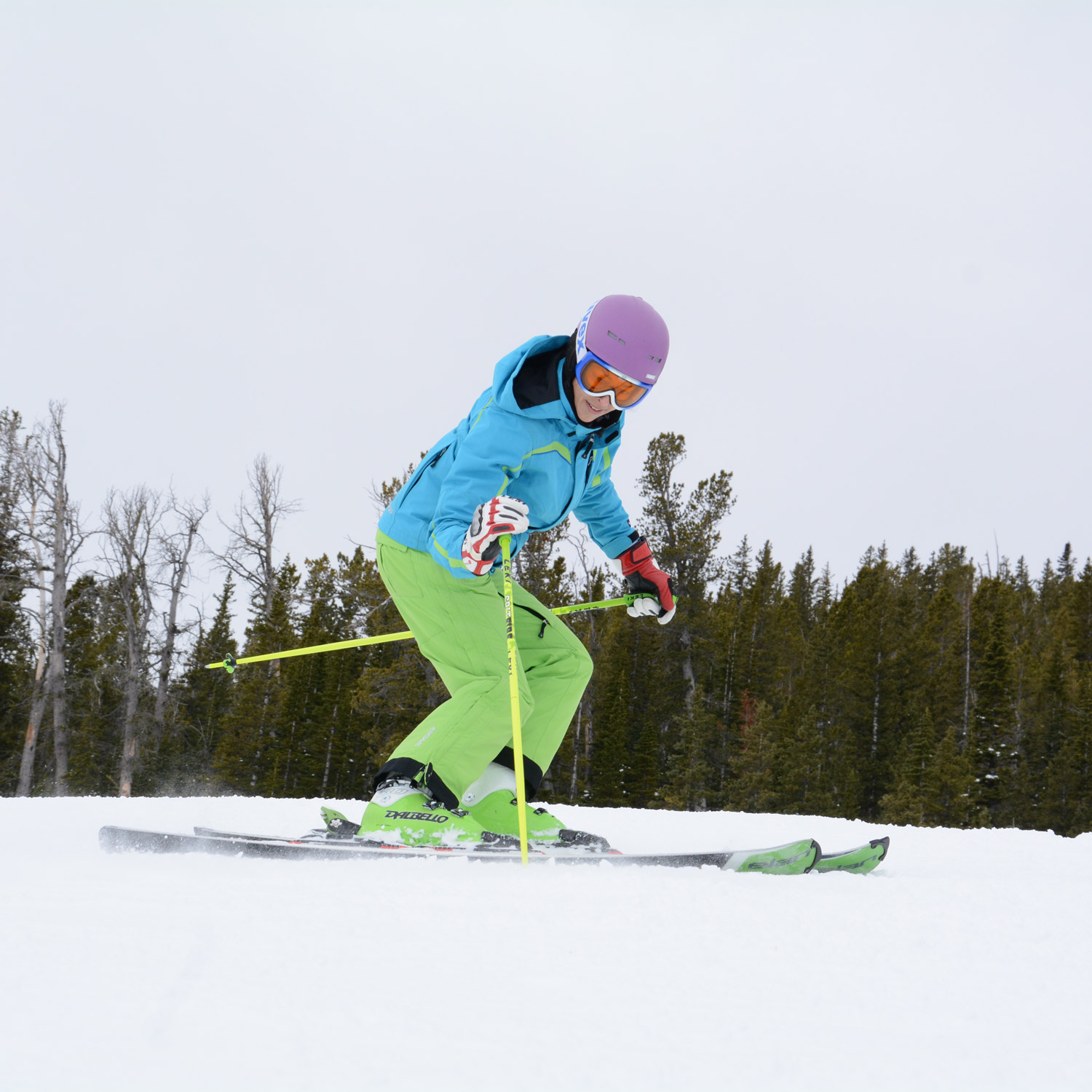 Make GS turns down a wide trail with moderate pitch. Step up the hill at least three to four times during the traversing phase of the turn. Make another turn, and then step up again as you head the other way, and so forth down the trail. This drill should be called “Giant Steps” as the steps should be strong and pronounced, not baby steps or a shuffle of the feet. It tests your balance and whether you are carving on the outside ski (downhill ski). If you’re not centered with your weight over the downhill ski, you won’t be able to step up. 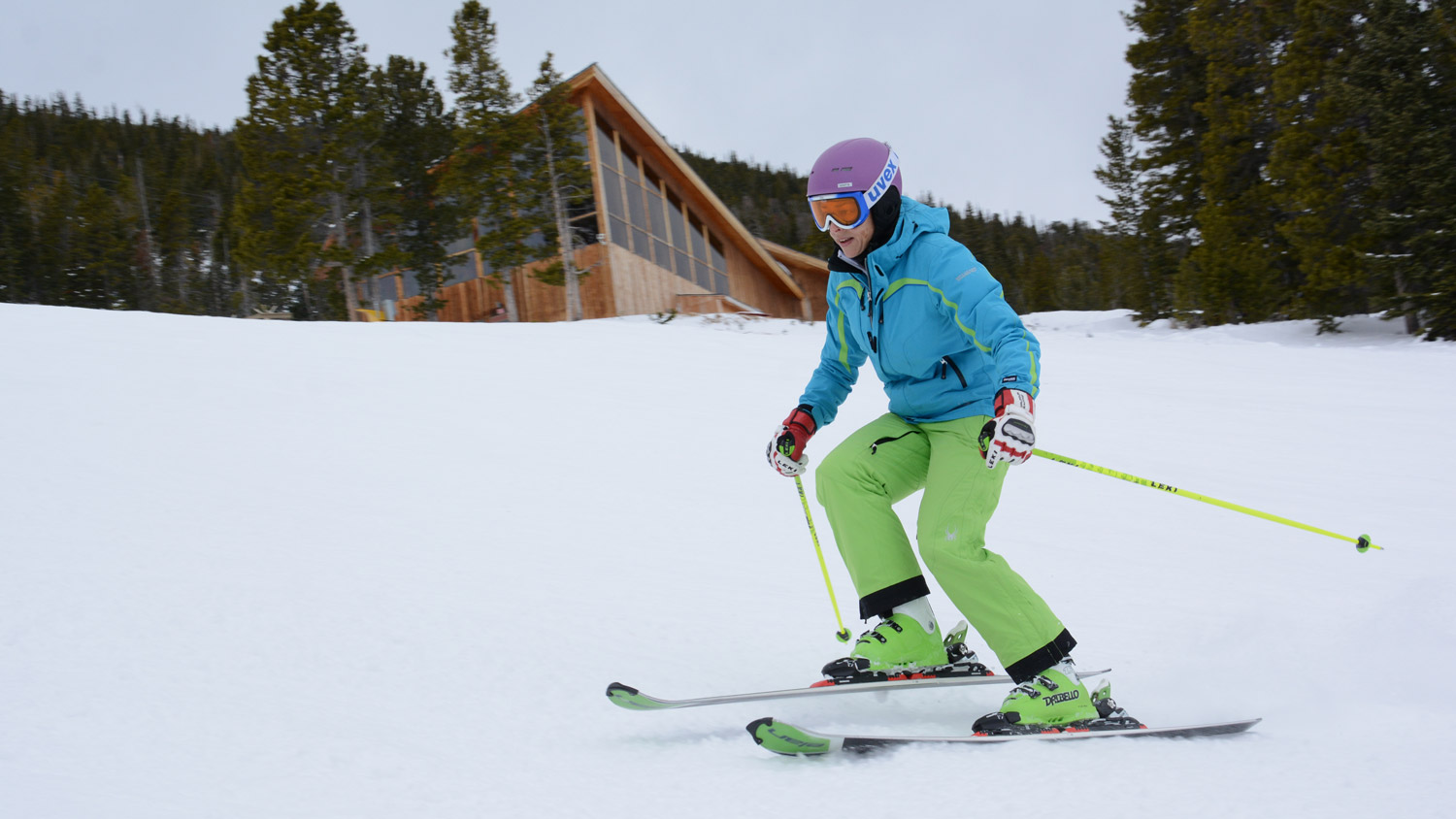 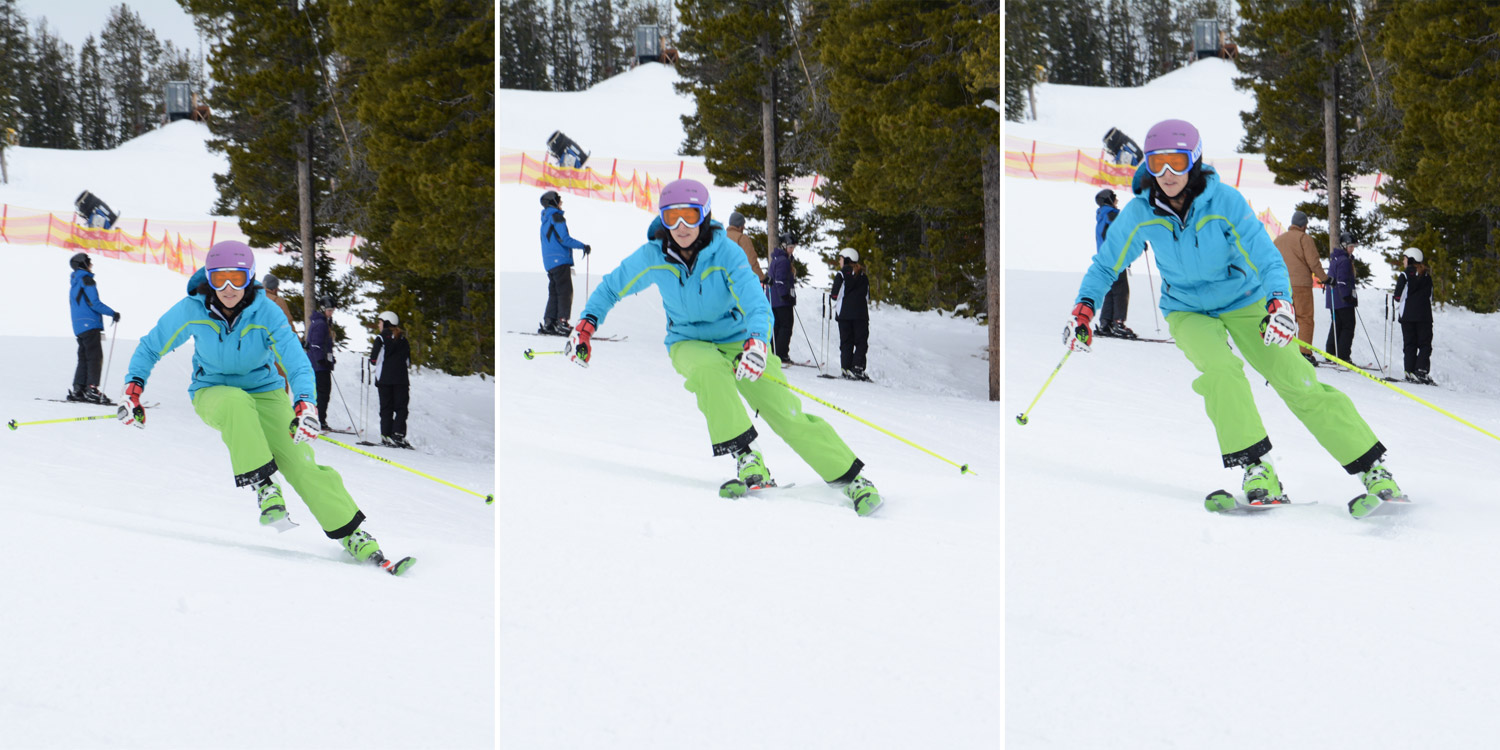 This drill is named after three-time Olympian Erik Schlopy, who apparently favored it, though ski racers have been doing it since the 1970s. Leave your poles at the top. As you make GS turns down a moderate slope, place your outside (downhill) hand at your waist. You should feel your hip and rib cage close together at your hand as the turn progresses. There are several variations for the uphill hand, over the head or forward. I prefer to keep my uphill hand forward as if it’s holding a ski pole. As you make a new turn, switch hands. Schlopy Turns make you aware of your body position and how angulation increases as you turn. If your hip and rib cage don’t narrow together, you’re leaning into the hill too much. 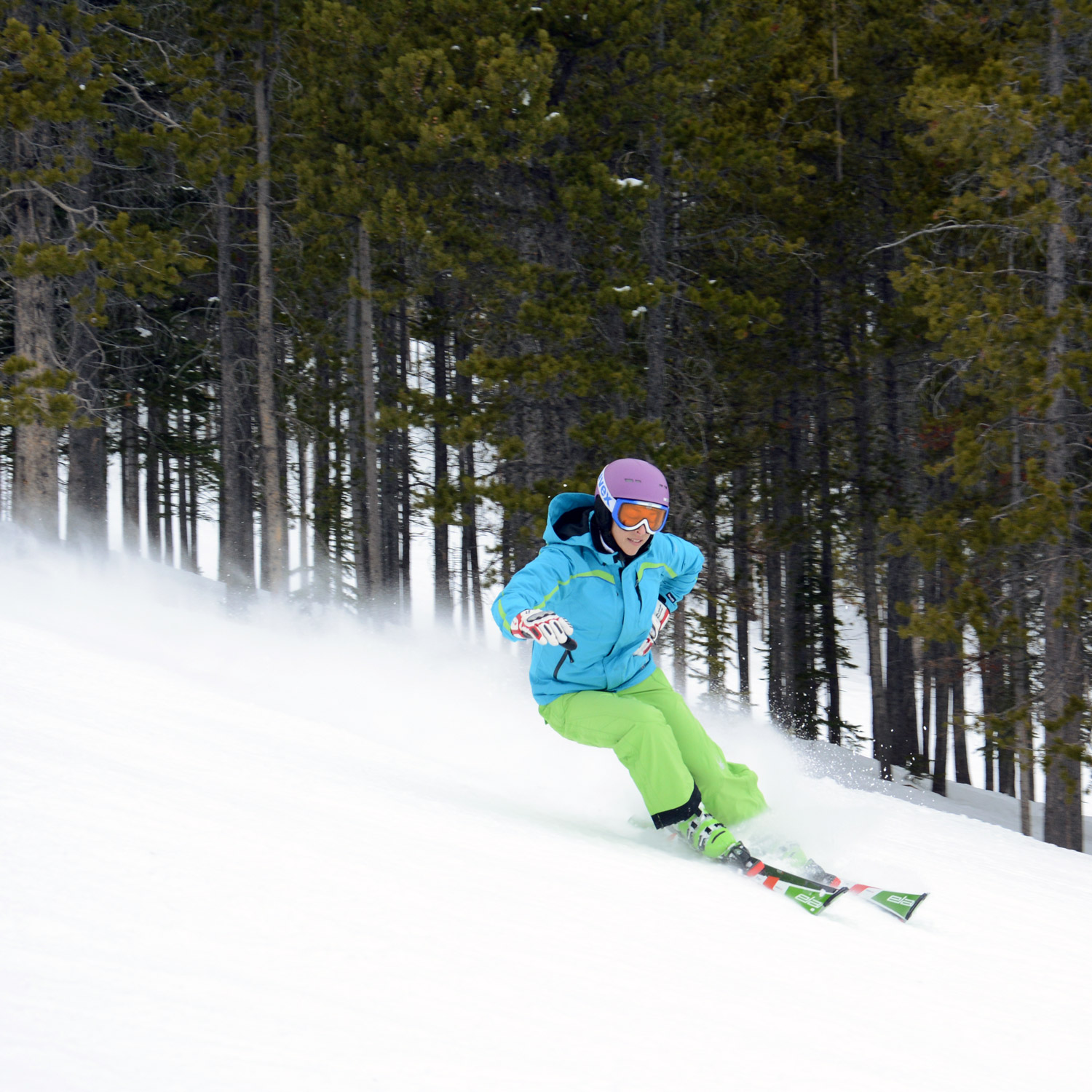 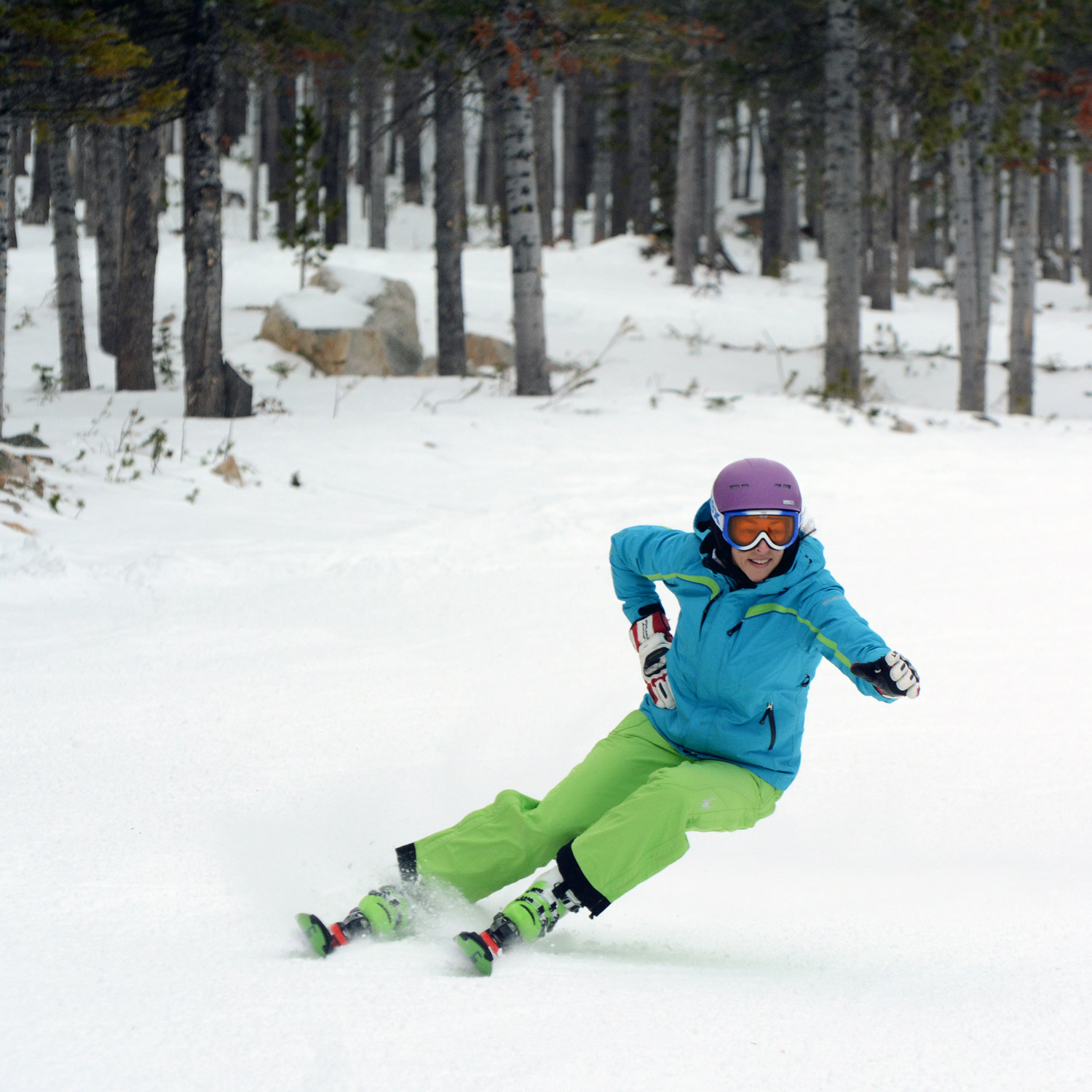 Hold your ski poles slightly below at their midpoint then look down the fall line, picking a landmark at the bottom of the trail. Keeping that landmark between your ski poles, make slalom turns down the slope toward that point. Control your speed by making round, carved turns rather than jamming edge-sets. This drill helps you keep your shoulders level and upper body quiet while your feet and legs do the work, moving laterally below. It helps you master separating your lower body from your upper body during quick slalom turns. 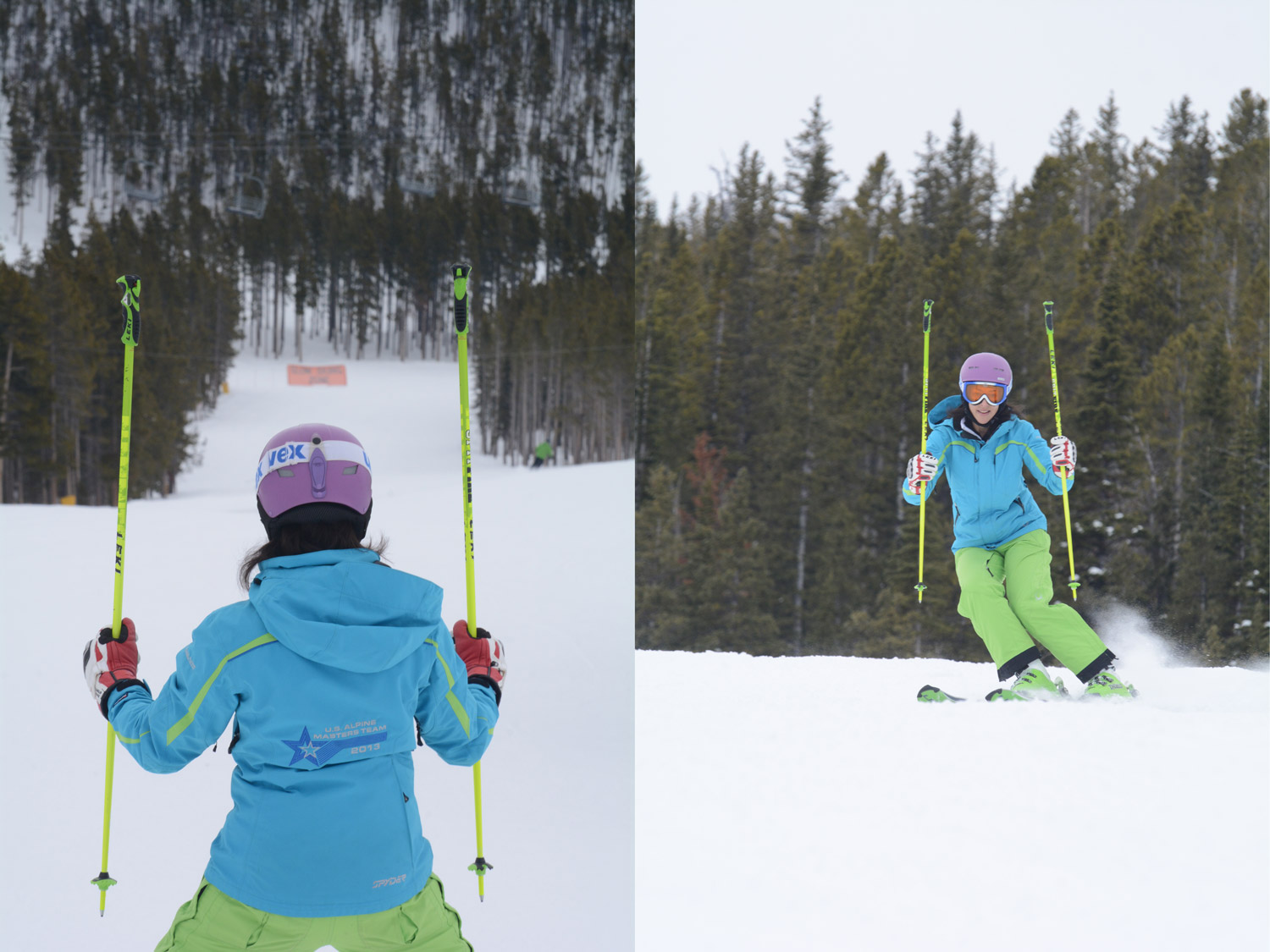 Most junior racers spend hours on one ski and, as they get better at, it’s often among their favorite drills. Not so with masters racers. As masters graduate from class to class, they seem less and less willing to ski one ski, and understandably so. If you’re not an expert at it, the chances of a hard fall are high. Instead of taking off one ski at the top of the chairlift and attempting an entire run on one foot, do one-ski turns with both skis on. Start on a shallow (beginner) slope. Lifting one ski completely off the snow, make a dozen turns on the other ski, then switch feet. This drill not only tests your balance, but also teaches you to get lots of tip pressure at the top of each turn. If you don’t make a move forward by flexing at the ankle and recentering your body, the ski will simply go straight, particularly when you’re trying to carve on the uphill edge. This drill also makes you a more agile, athletic racer. In a race, if you lose pressure on the downhill ski, you’ll be comfortable saving the turn on the uphill ski. 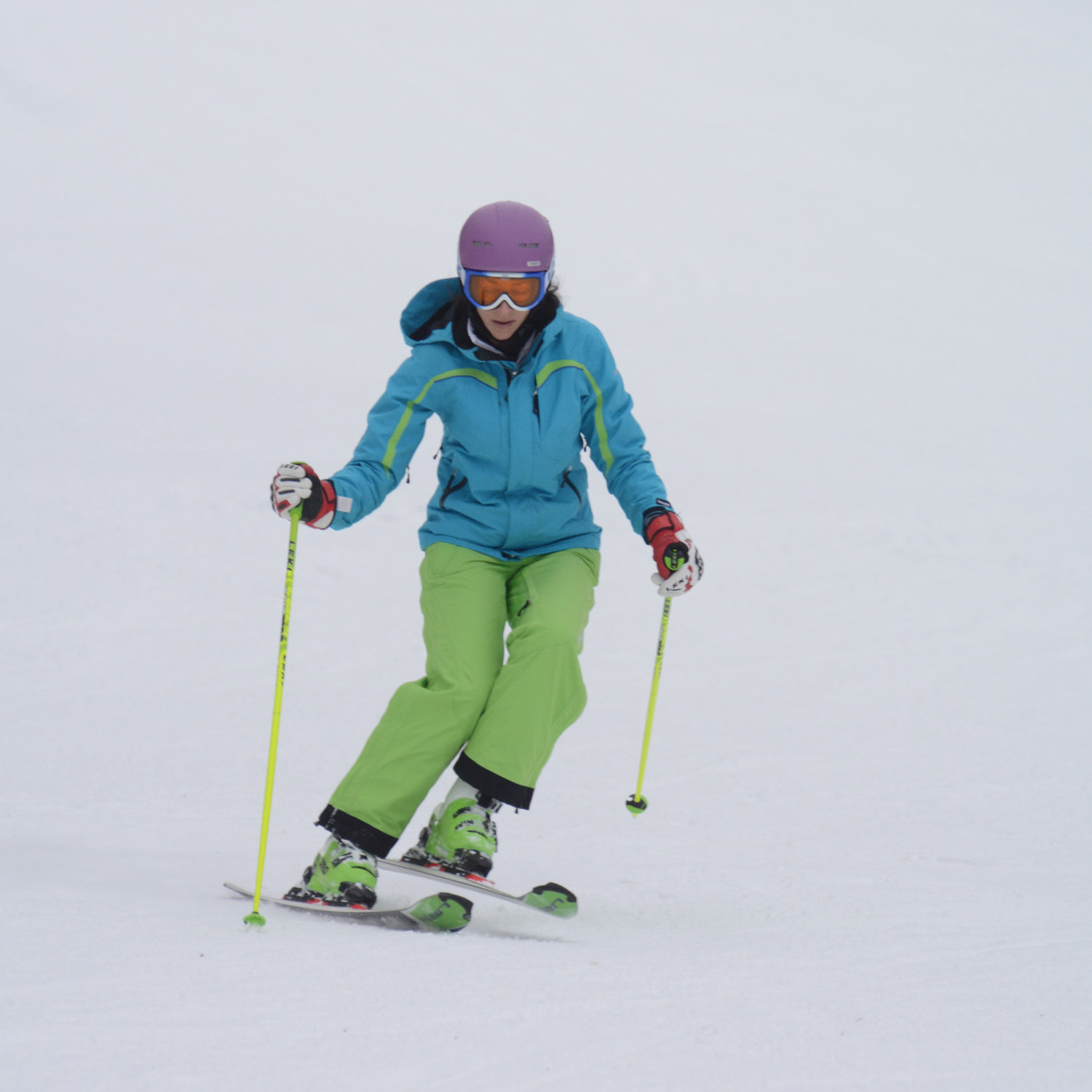 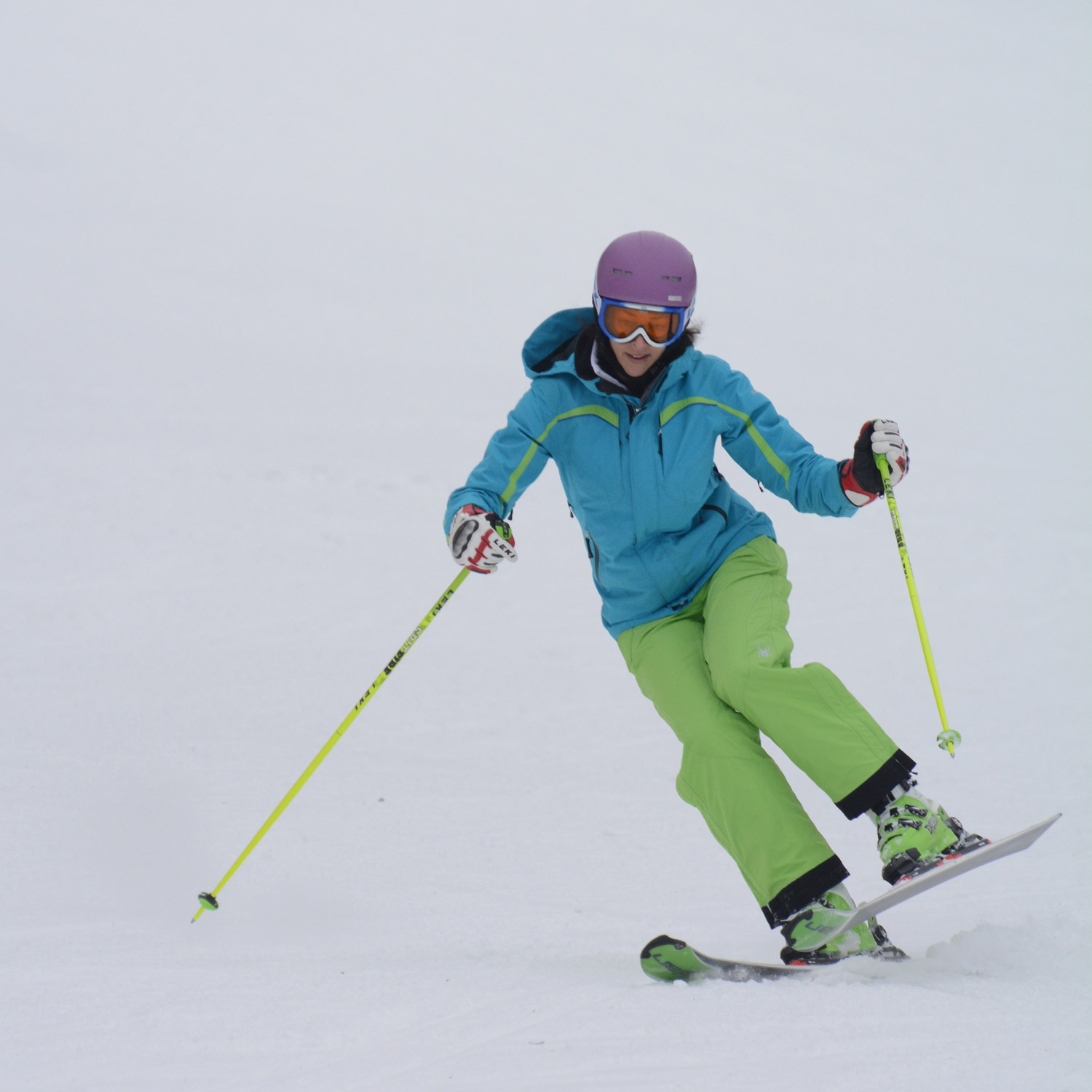 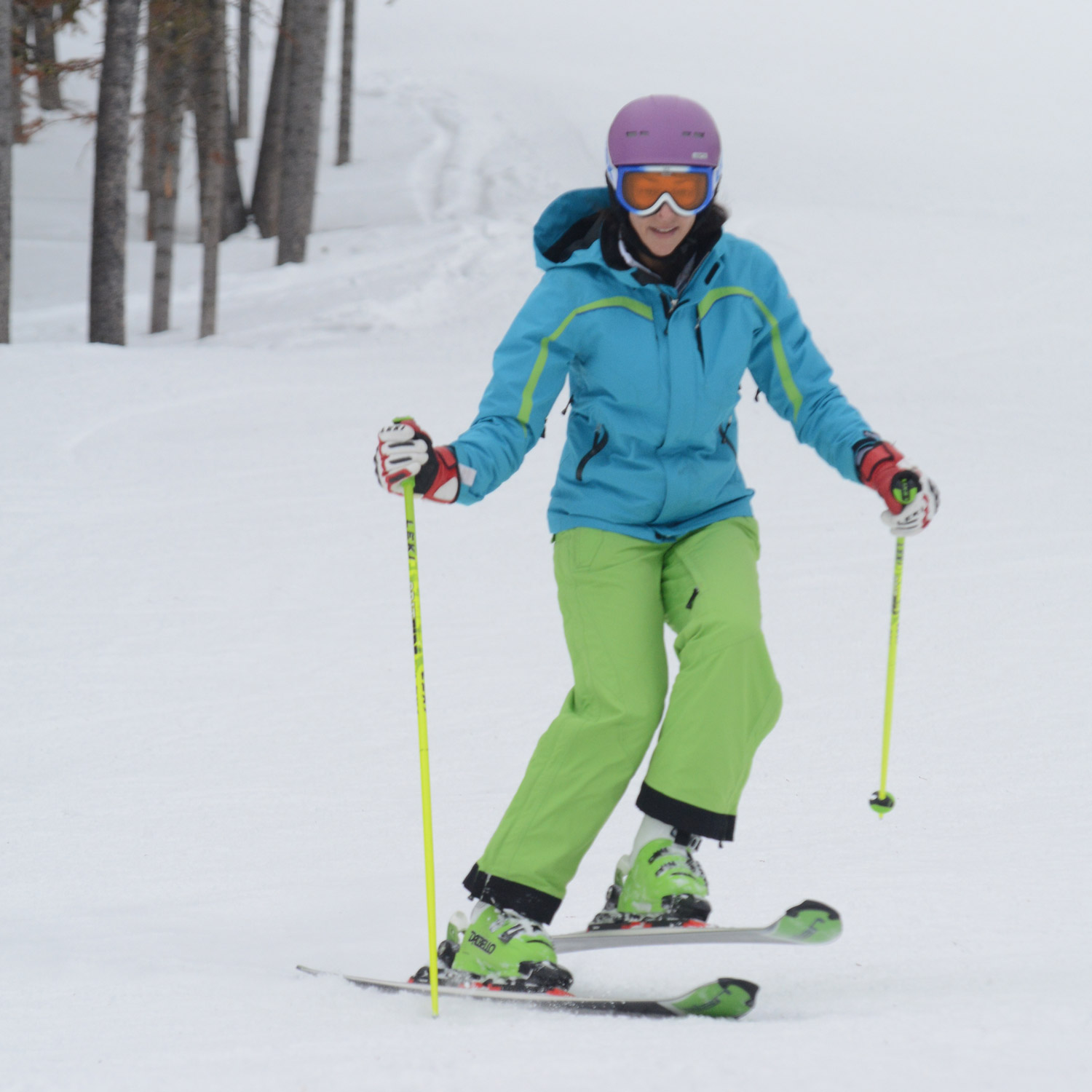 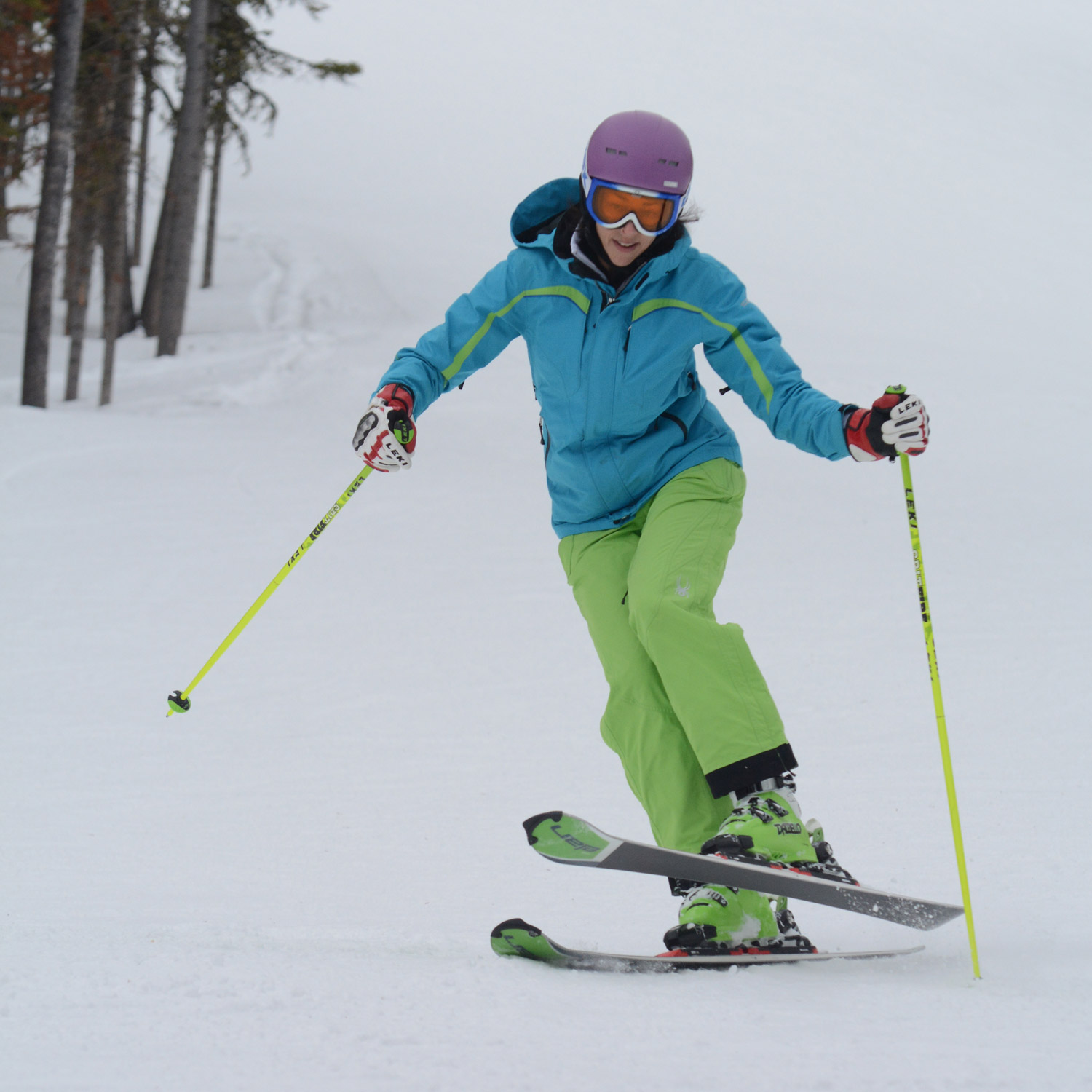