FALUN — It was an unlikely scenario. In a raging, wet Swedish snowstorm, three athletes shivered in the cold of the finish stadium in Falun. In the middle stood Sweden’s favorite daughter, Charlotte Kalla, finally achieving her world title.

Flanking her were two Americans, beaming with pride and a bit bewildered at what was happening around them.

It was an unexpected turn of events at the mid-point of the FIS Nordic World Ski Championships in heart of Dalarna. The women’s 10K had been touted as a matchup pitting Norway’s Therese Johaug and Marit Bjoergen against Kalla, a 2010 Olympic champion. But as a passing blizzard dumped new snow on the steep pitch of Moerderbakken, the Norwegians weren’t able to play with the new cards they had been dealt.

While it would be easy to say, “I did my best” and blame the weather, three medals were awarded Tuesday. And the Americans came to play, grabbing two.

“With the snow, I had an opportunity,” said Caitlin Gregg. “But so did the girl ahead of me and all those behind me. I skied my heart out.”

In the 1980s American cross country skiing had a single sport hero in Bill Koch with his 1976 Olympic silver and 1982 World Cup title. But as a nation, America tended to settle for second place behind the Scandinavians. That began to change in the 2000s when a new wave of athletes including Kikkan Randall, Andy Newell and Kris Freeman showed that the U.S. That has grown with the likes of Diggins, Liz Stephen, Simi Hamilton and Noah Hoffman, all of whom have challenged for World Cup wins and podiums.

In the team meeting on the eve of the 10K, U.S. coaches looked four American girls in the eyes and asked them to think about a question: “Why not me?”

No one thought about No.3-starting Caitlin Gregg as a medal contender. But she did. This single day had been her sole focus for months. Gregg wasn’t on the World Cup tour. She and husband, Brian, moved to Summit County, Colo., for a month to do high-altitude training. Every minute of her life in the last month had been designed to lead up to the 25 minutes, 55 seconds she was on course.

Don’t let the face glitter fool you. Jessie Diggins, the smiling, fun-loving dance choreographer of the team’s famous “Uptown Funk” video is one of the fiercest competitors. Put her on a pair of skis and she’s going to fly. Tell her she’s in the lead, and she’s really gone.

Earlier that morning, U.S. coaches had looked at the sky and talked about the forecast for snow right at race time. In the American wax cabins, the techs were processing a complex forecast. Temperature. Humidity. Old snow mixed with new. Thousands of variables. Four skiers, four different ski brands: Madshus for Caitlin, Salomon for Jessie, Rossignol for Liz Stephen, Fischer for Kikkan Randall.

Coaches ran skis back and forth to the test track — a course they knew wouldn’t be the same 30 minutes later. It was time to roll the dice. The Americans prepped for wet, new snow. At the start line, the U.S. athletes clicked into rocket ships — they just didn’t know it yet.

In an interval start race, athletes hit the track at 30-second intervals, racing against the clock, coaches watching split times along the course. With 70-plus starters, it would take more than a half-hour to get everyone on course, the best seeded athletes toward the very end. Gregg started third, Jessie Diggins 37th and Kalla 49th.

When Gregg started, there were tiny flakes. As Diggins headed out 17 minutes later, the snow was dumping. Coaches suddenly realized that Gregg’s early splits were for real. The track was slowing. As Diggins reached 3K, Gregg was finishing as race leader, making her way into the stadium as the first finisher. Sweden’s Kalla was just kicking out of the start.

Gregg sat in the fur-lined leader’s chair, a novelty often enjoyed by early starters — simply waiting for the next one to bump her out of her seat.

But today, it was different. No one came.

As Diggins churned through the snow into the halfway mark, it was now clear. The Americans had a real chance. Coaches from every nation yelled at Diggins repeatedly, “You’re in the lead.” She heard them, loud and clear. Seven kilometers into her race, the top-seeded Norwegians and Swedes were hitting the early splits. The Swedes, led by Kalla, were on it. The Norwegians were not. The U.S. was 2-3 behind Kalla.

For the next 15 minutes, the world spun in slow motion. As more splits rolled in, Kalla was the only skier showing up ahead of the Americans. Bursting with energy those final few kilometers, Diggins took every risk on the corners — almost crashing. She came in to unseat her teammate. But they continued to hold first and second until Kalla came home the winner.

As Caitlin and Jessie accepted their medals that evening, a lone American flag flew higher and bigger over the sea of blue and yellow in the spectator stands. But above the medalists, two sets of stars and stripes were raised.

“We had this opportunity and we took it,” said Diggins. “To be part of the amazing atmosphere on the U.S. Ski Team? It’s incredible. We have so much fun together. We create this really positive energy. I feel really proud to be a part of the team.”

There were many winners in the Falun 2015 medals plaza that snowy night. But Coach Matt Whitcomb said it best. “The group I’m most happy for tonight,” he said, “are all the 9-year-old kids back home who will be inspired.”

Sport is about inspiration. It’s about seizing opportunity and sharing it. From all the cross country kids in America, congratulations Jessie and Caitlin. Now let us inspire you.

The Flip Side of Falun

FALUN — What’s it like for the Scandinavians at these World Championhips? It’s obvious: The people in Sweden and Norway are expecting medals. They want to see their countrymen atop the podium. National pride is at stake at Falun 2015.

The Norwegians have been dominant this season, winning 85 percent of all World Cup podiums so far. But Team Norway at is also still digesting the Sochi 2014 Games, where they became mired in waxing challenges, especially in the team events that have major national significance. Meanwhile, Team Sweden is enjoying the rare home snow advantage. 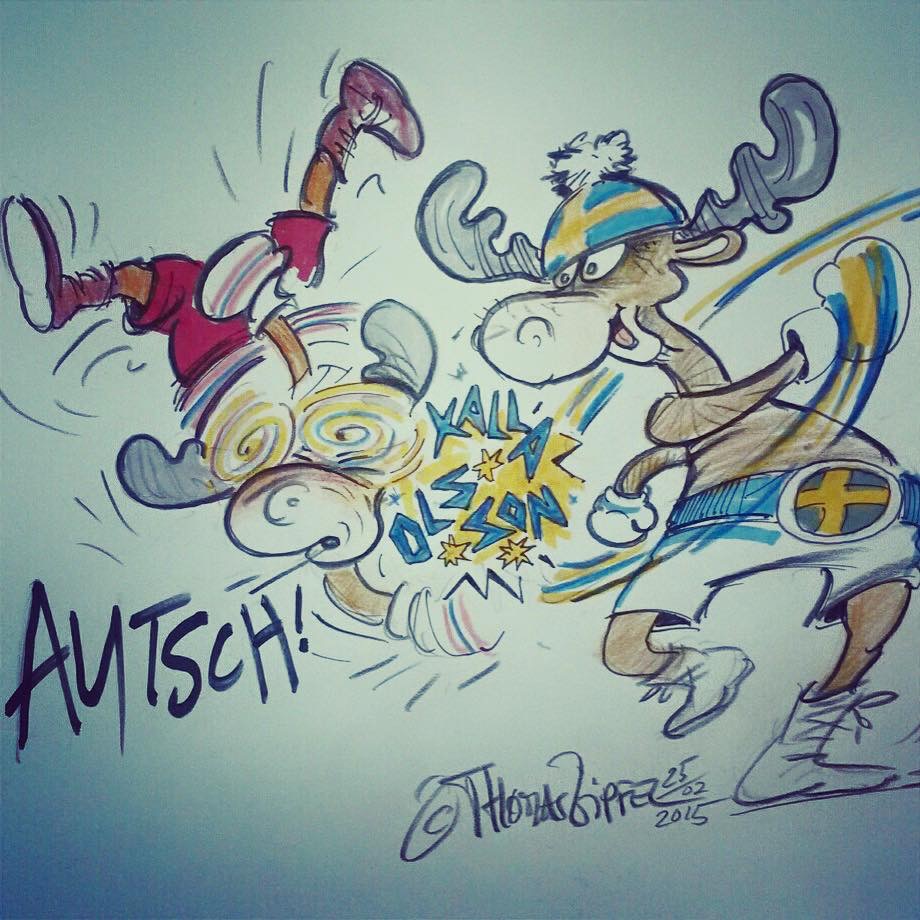 The FIS has specific rules for team size, based on the number of athletes. Norway and Sweden are presenting full contingents so they are entitled to the maximum number of support staff. But the big teams find that’s not nearly enough for their needs. Many games were played in the background in the weeks before the Championships. Event organizers and the FIS were busy checking and double-checking the accreditation and hotel requests by the teams and industry to safeguard some equality among the participating nations. That’s why they did not agree with Norway that they really needed 66 people supporting their 24 athletes.

Meanwhile, ski preparation is where national teams spend upwards from a third of their entire budget, some close to a half. Team Norway boasts a special-made, multi-story waxing truck travelling with the team. Team Sweden has a whopping 700 pairs in their truck. That equals to 29 pairs of skis per athlete. Each pair needs to be prepared, structured and waxed and, most importantly, tested for each race. That’s a lot of testing, especially when the conditions are around zero degrees and changing daily. The service teams are out day and night.

Few would have guessed where the real black market is at the Championships. It’s in the bibs. Not the athlete racing bibs, but large and colorful bibs used to control access to the courses over and beyond an accreditation; there are bibs for “team,” “start/finish,” “course” “jury,” “FIS” and “FIS service.” Each is numbered and color-coded. They seem to be worth gold, and no team ever has enough of them.

Besides the fight for medals, the World Championships is a gathering of the united nations of skiing. Countries such as Tonga and Trinidad & Tobago join the global ski family with their teams. A total of 59 nations are participating in Falun. But most of them return home after the first week, so the departing teams’ bibs become hot currency and keep the FIS jury on their toes checking for team bibs, finding new owners for the second week of championships. You never know: that additional bib could make the difference in the game between success and failure. At the championships, no one remembers the fourth place. 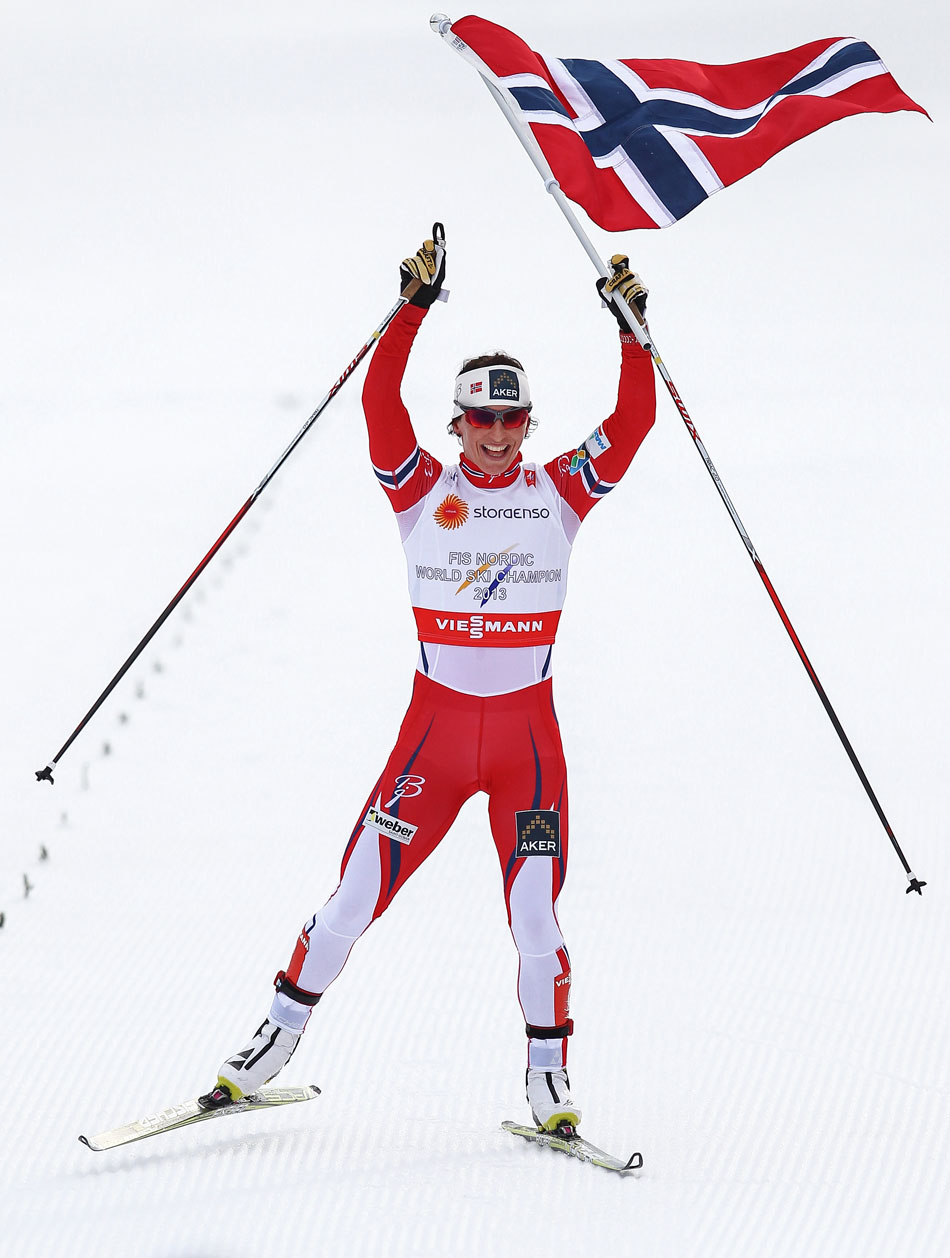 The stars themselves are also playing a game — a mental game. Especially in the men’s races, there are a dozen or more athletes capable of winning. On competition day, it’s mental fitness that often makes the difference.

Since the start of this World Cup season, Petter Northug has been making headlines in Sweden and Norway — not with his results, but with his comments. One day he’s challenging Sweden’s biggest hope and Falun native Calle Halfvarsson, while the next he’s picking a fight with the former Swedish super star Gunde Svan, or arguing with another former top champion, Thomas Wassberg. Just before the championships he irritated the Swedes by wearing the Swedish uniform: “Ready for Falun? #Notinthissuit“ — Riikka Rakic 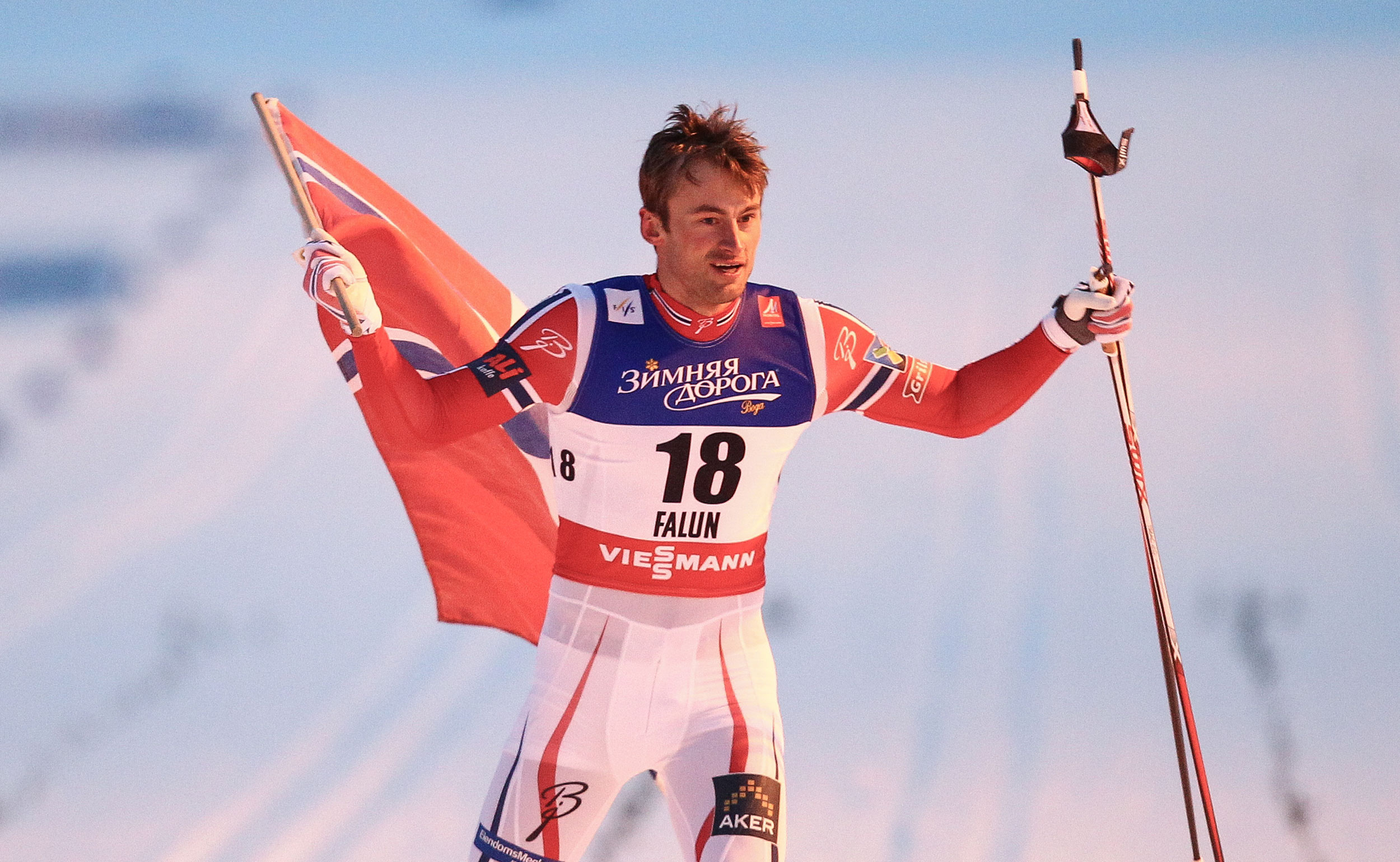